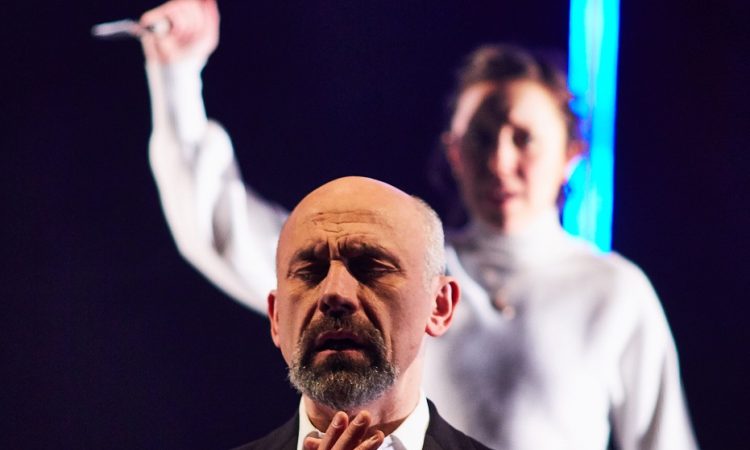 When Princess Hamlet grabs Ophelia for a passionate snog within the first two minutes of the show you know this new Leeds Playhouse production isn’t going to be a conventional walkthough of a GCSE text. And that’s just for starters.

An entire new scene is played out before the night watch catch their first glimpse of the ghost of Hamlet’s father. In this modern dress production, the sporty young princess is away at Uni when news of his death arrives; tellingly, in the form of a sealed parchment rather than as a text message.

The State of Denmark is everything and everywhere. Soldiers gently strip off Hamlet’s casual fencing gear and dress her in the formal mourning attire of Court. The soldiers, members of the Playhouse youth theatre, are ever-present throughout the action. As are spotlights and loudspeakers.

If making Hamlet female is a bold move, having Polonius as Ophelia’s mother rather than her father is a stroke of genius. Susan Twist owns the part and brings new dimensions to the role of the unctuous courtier, constantly seeking to please the new king, with a clear favourite son in Laertes and a coldness towards Ophelia that suggests a deep and constant disappointment, possibly rooted in homophobia.

Guildenstern didn’t make the cut, leaving Rozencrantz (Darren Kuppan) the only friend brought in to cheer up the grieving princess. That was a good call; he’s a plausible best mate and confidant for Hamlet in a way two lads could never be. And it’s in the eyes; Kuppan’s Rozencrantz wishes Hamlet was straight.

The night belongs, though, to Tessa Parr who brings a freshness and vigour to the part of Hamlet. She’s believably headstrong as a confident young royal with a sneering contempt for her uncle Claudius (Joe Alessi), the man who seized the throne and slipped into her mother’s bed. Once convinced of his guilt in killing the old king she is relentless in breaking down his bluster and confidence. But she’s also vulnerable. Spurned by Ophelia, who rejects Hamlet’s advances on the orders of her mother, she reacts defensively, turning the hurt not into tears but into a brash facade of bravado as she screams at her lover to “get thee to a nunnery”.

Simona Bitmate as Ophelia gives her character deep insecurities, almost hiding behind her dowdy clothes to escape her mother’s disapproval. She loves her brother and can’t believe she’s won the love of Hamlet; the conflict between passion and duty driving her to madness. This Ophelia is no pre-raphealite painting; it’s a raw depiction of a woman insane through grief and circumstances beyond her control.

The other classic set-piece speeches inevitably lose some of their impact in a production which is centred so much on the relationships, not the text; “To be, or not to be ..” and “Alas, poor Yorick ..” are no longer the highlights of the evening, and that’s not a bad thing.

As with the rest of this season, the Leeds Playhouse ensemble of Robert Pickavance as the ghost and the gravedigger, Jo Mousley as Gertrude and Dan Parr as Laertes deliver strong supporting performances, together with Crystal Condie as Horatio in another gender-swapping part.

The set is simple; a central black platform and a pair of black ramps to a lower level, a row of silver columns behind. There’s copious use of dry ice. The Playhouse has excelled with its soundscapes this season, and Alexandra Faye Braithwaite as composer and sound designer makes excellent use of bass notes and static in this show to suggest the disquiet and disconnection in the minds of the players.

Overall this is a gutsy and original re-telling of the Hamlet story. There’s nothing enigmatic about this young princess; the ghosts are real, the foils are sharp but not as sharp as the tongues around court. It won’t please the Shakespeare text fetishists who hang on every syllable of the Bard’s work, and are also sniffy about the northern voice. This show is another highlight of the Playhouse pop-up season and a brilliant re-imagining of the tale for an audience with an open mind.

HAMLET runs at the LEEDS PLAYHOUSE POP UP THEATRE until March 30th with relaxed, signed, dementia-friendly and audio-described performances within the season.