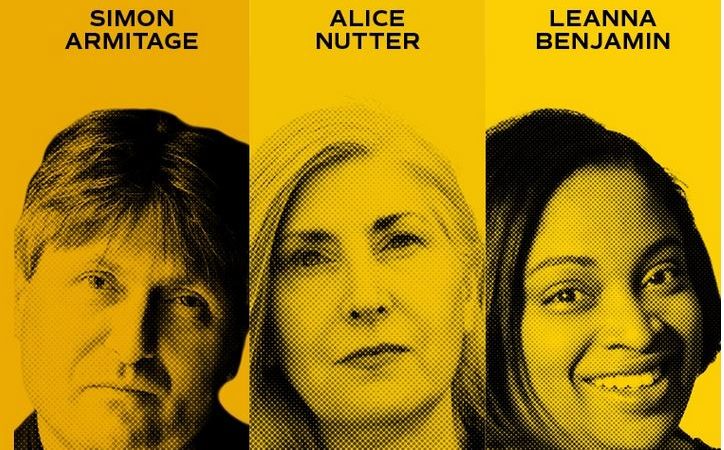 Audiences are returning to Leeds’ premier theatre after Covid scuppered earlier attempts to get performances back to near-normal before Christmas. Leeds Playhouse is resuming activities cautiously, with a series of monologues themed through six decades – RICHARD HORSMAN took a socially-distanced trip back to the 70s, 80s and 00s.

It’s the applause the catches you by surprise. Even with the Courtyard Theatre auditorium two thirds empty to satisfy requirements to keep audiences safely segregated, the sound of maybe a hundred people showing their shared appreciation together feels very strange after fifteen months of enforced isolation.

I’ve never taken to theatre shown on a screen, although that option is there still from next week with this production for people not yet comfortable to venture out in the company of others. So I was more than ready to take my seat – temperature efficiently checked, hands sanitised and face masked – in the Courtyard Theatre for my first indoor performance experience in nearly 500 days.

Decades is a series of six monologues by writers all of whom have a connection with our region.

The pieces have been commissioned by Leeds Playhouse to celebrate its 50th anniversary, and each takes inspiration from an individual decade from the 1970s to the 2020s. Audiences can opt to see all six pieces in one outing, or watch them divvied up into two separate blocks of three. The production is also going on tour to community venues, and performances will be streamed online from next week.

Confusingly the groupings don’t quite follow a neat chronology – I went to see the 70s/80s/00s selection, whilst the 90s are bundled with the 10s and the 20s. On the night Alice Nutter’s 80s-inspired Nicer Than Orange Squash precedes Simon Armitage’s 70s-themed The Bodyguard, with Leanna Benjamin’s The Unknown, set at the millennium, concluding the evening.

Any series of monologues is bound to attract comparison to Alan Bennett’s Talking Heads, which the Playhouse has also staged successfully, and recently. Be aware that whilst these tales are not lacking in humour they are decidedly grittier than Bennett’s creations. The atmosphere is smoky from the start – that really is deliberate, not just your glasses steaming up from the facemask. Amanda Stoodley’s looming vertical set stops a lone actor seeming too small in a big space, whilst also creating a grungy domestic/industrial vibe.

That theme is developed immediately the lights go down by Isabel Coward as Loz, living in a non-too-successful commune with boyfriend Gaz in Alice Nutter’s Nicer Than Orange Squash. Isabel treads a fine line with her character, never letting gentle lampooning of a time when veganism was tough before meat free options were a thing detract from our empathy for Loz, who’s a lot brighter than anyone will accept, and who won’t let go of her dream to be a writer whilst coping with a soap-dodging boyfriend who’s not entirely who he seems to be.

The performance of the evening comes from 15 year old Connor Elliott in Simon Armitage’s The Bodyguard – which is also the piece in this half of the bill with the greatest chilling period resonance.

Connor plays a 13 year old boy growing up under the menacing shadow of the Yorkshire Ripper in the 1970s. Wilf watches too much news, and has to meet his mum off the bus as she comes home from work on foggy moonless nights. Because that’s what we did when Peter Sutcliffe was at large. He wants to be a punk, but his sister’s into David Soul and his dad loves Smash instant potato. It’s a difficult time to be a teen – and who’s holding whose hand on that walk back from the bus stop?

This half of the programme concludes with Leanna Benjamin’s The Unknown. Nicole Botha plays Sophia, a party girl who would like to be celebrating the start of a new millennium at the Majestyk nightclub .. her sparkly dress and shoes are ready in the corner, she just needs to sort out her makeup. But fate has other ideas, and as Sophia’s story unfolds we realise just how much life has changed since she came to Leeds. A poignant story well told, and one which resonates strongly with some of Bennetts’s better known monologue moments.

Overall an enjoyable and thought provoking evening with some memorable individual performances.

Theatregoing doesn’t feel quite normal as yet, although I understand the intention is to boost auditorium capacity from the current 25-30% to nearer 50% over the coming weeks. That should make the foyer areas feel a bit more convivial and less corporate, although all credit to what felt like legions of Playhouse staff and volunteers who on reopening night last night made the relatively sparse number of visitors feel most welcome and, above all, safe.

DECADES: STORIES FROM THE CITY runs in the Courtyard Theatre at Leeds Playhouse from 19–29 May.

The various performances are also available to stream online via Playhouse: At Home from 24 May – 5 June.