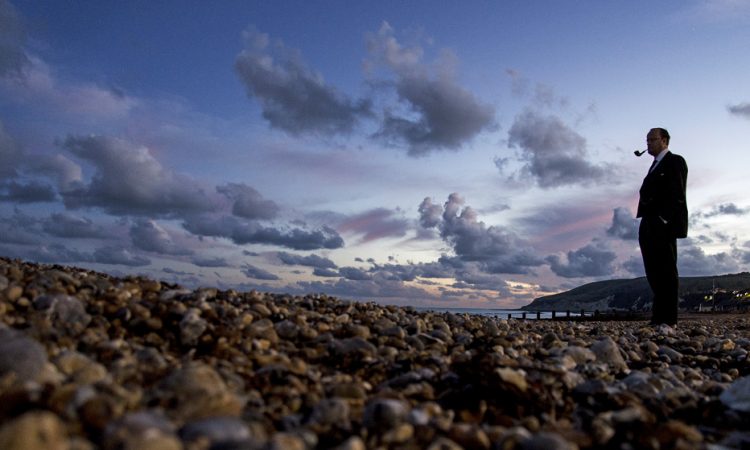 ROBERT LLOYD-PARRY tours the country scaring people for a living. He tells NEIL MUDD he prefers detectives to ghosts, but still remembers the thrill of reading M. R. James for the first time…

This Sunday at Leeds Library, actor Robert Lloyd-Parry presents two classic M. R. James tales – Canon Alberic’s Scrapbook and The Mezzotint – under the title A Pleasing Terror. It’s an experience Parry – who bears an uncanny resemblance to the author – has been bringing to venues around the country since 2005.

“He was an excellent writer,” Parry says of James. “He had an effortless command of the English language and such a great imagination. I think it’s the pacing of the stories that makes them so good. Canon Alberic’s Scrapbook is a prime example: the unfurling of the narrative; the building of the tension. It’s expert. I don’t like to analyse it too closely, but it’s a perfect unrolling of a series of events.”

He inevitably come across many aficionados, though does not count himself as one of them. Growing up he was an avid reader of Arthur Conan Doyle and Raymond Chandler – “I would watch detective movies rather than horror movies” – and he liked playing Dungeons and Dragons.

The actor first encountered Canon Alberic’s Scrapbook in an anthology his father had probably given him when he was twelve or thirteen years old. “It fitted in with the kind of fantasy and Edwardian tastes that I had, and which I still have,” Parry says.

Canon Alberic’s Scrapbook is a challenging, disturbing and utterly brilliant piece of writing. An ingénue encounter with a collection of obscure medieval texts (all presumably made up), it is suffused with the author’s trademark sly humour and knowing presence.

“I can’t pretend the appeal is (James) plays with genre or formula or things like that,” says Parry. “It’s just that they are great works of entertainment. When I re-read Canon Alberic’s Scrapbook at the age of thirty, I was transported back to the thrill of my first experience reading it.”

One early performance took place at the Fitzwilliam Museum in Cambridge, where Parry was working at the time. “M. R. James had been the Director of the museum [1893 – 1908] (which) prompted me to re-read his stories. I didn’t know this at first, but he wrote them to read aloud to friends. The character of the first person narrator is very strong in the stories, so it wasn’t a great leap of imagination to present them as monologues. I performed in a room which had actually been his old office, and it’s sprung from there.”

Parry’s approach is immersive. “I’ve done an awful lot of research into M. R. James. Any serious actor will try immersing themselves as much as possible in a character, and the character of the narrator is both very strong and very important in these stories. The voice I adopt is exaggerated, but it’s one that comes naturally to me.”

The actor performs by candle-light on a set suggestive of an Edwardian study. “It is supposed to implant into the audience’s mind the kind of room they might have been in,” Parry says. “I try imagine who else is in the room listening. Some people find it very unusual that there’s just a man dimly lit telling them a story. They’re not necessarily put off, but they can be put off balance, and you have to work harder to draw them in.”

“It does work best with people who have some familiarity with M. R. James. When I do it in Cambridge, it always goes rather well. That’s partly due to the character of the narrator who will drop in Latin phrases and expect you to know what they mean. I can imagine when he was reading his stories, M. R. James enjoyed being the smartest guy in the room. He’s showing off a bit. There’s a kind of cheeky aspect to the character that I play as well, I think.”

Parry also performs The Time Machine by H. G. Wells, and is working on a new show for Harrogate Theatre based on the stories of H. P. Lovecraft – though in neither does he appear as the author, he says. However, it is with M. R. James he shares perhaps his strongest affinity (even appearing as the author in a Mark Gatiss documentary for BBC Four a few years ago).

“I’ve been doing it fourteen years. I can no longer pretend I don’t want to be typecast,” he says. “It’s an odd way to earn half a living, but there are worse ways… New people are still coming, so they obviously enjoy it.”

I ask if there is a neglected story in the canon of ghost stories by James. “Have you come across The Residence at Whitminster?” he asks. “It’s one of his less well-known ones [collected in A Thin Ghost and Other Stories]. It’s very horrid, and really quite an exciting story.”

“It’s enjoyable to hear exciting tales of impossible events,” Parry says bringing matters to a close. “I don’t want to theorise too much about it. They give you a jolt; sometimes it’s a jolt of laughter, sometimes of unease. The idea is to cause a pleasing terror.”