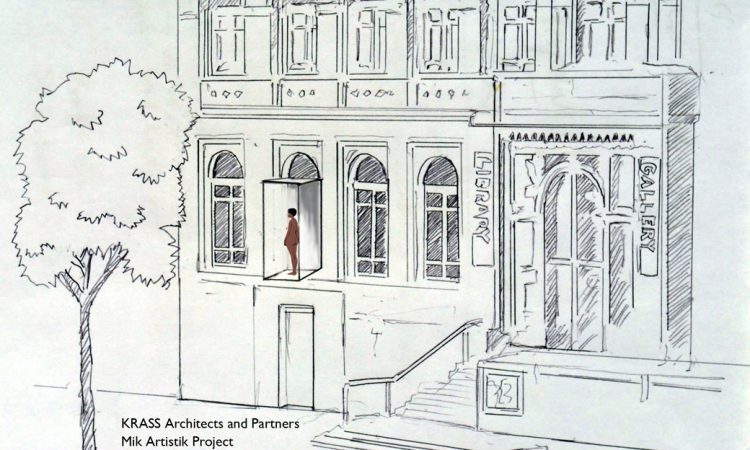 The Fifth Plinth, a new story by IVOR TYMCHAK

I guess it all started with the plinths in Trafalgar Square.

In the summer of 2009 some fashionable artist at the time created a social media-type exhibition space on the fourth plinth. Members of the public could write in and suggest themselves as living exhibits during one of the available time slots that summer. I happen to know someone who managed to ‘win’ a slot. He had to travel from Wakefield to London (at his own expense) taking his invented costume with him then he had to stand for one hour in unrelenting sunshine while tourists gawped at him.

He thought he was art.

A bloody fool is how a lot of people in Wakefield saw him.

Anyway, that’s what gave Mik Artistik his idea for the extra seat in the Tiled Café in Leeds Art Gallery.

The café was already well known within the region for its Victorian splendour and many visitors from outside the area liked to make a point of having a snack and taking a photo of themselves in its grandiose space. It was a small-scale version of Betty’s cake shop in Harrogate.

The windowed wall of the café overlooks a pedestrianised strip that runs in front of it. Visitors can look down on the street life from an elevated position and watch people meet, chat and play giant chess.

This elevated position is what gave Mik his idea. He thought if an extension was built out of the side of the café, like a cuboid blister, it could become a Fifth Plinth. The extension would be a glass box that protruded from the wall so that pedestrians could look up and into it. Whoever was sitting in the box (drinking their coffee or stuffing their face with cake) would be an artwork for the duration of their tenure and on show to the passers by beneath.

At first, Mik chuckled to himself over the idea but then he realized it was a bang-on concept for the current state of conceptual art: it democratized art; the art was free of ideological, cultural conditioning by an elite and it hit the sweet spot when it came to social media coverage.

He also realized it would help put Leeds on a cultural map that was largely designed, drawn and coloured-in by privileged liberals in London. The Fifth Plinth could join The Hepworth and YSP as one of the artistic jewels in the North.

Mik got writing. He wrote a song about it first because that’s what he did for a day job. But then he wrote pages and pages of theoretical analysis that used words like ‘praxis’, ‘ouevre’ and ‘chiarascuro juxtaposition’. When he’d finished, he was satisfied it was totally incomprehensible and so ready to form part of an application for an Arts Council Grant.

In preparation for the application he approached as many architectural practices as he could find asking them if they’d be interested in drawing up an initial design for the pod. Many of the firms didn’t even bother to respond but one creative firm did. They saw the potential in the idea – not so much in regards to the artistic merit of it but to what it might do for their own reputation and business success. The deceased architect Zaha Hadid had demonstrated how architects could design buildings for tourists rather than for users. A lot of cities had made their mark by throwing up an iconic (for iconic read: absurd) building that drew the tourists in but proved impractical (or dispiritingly dull) for the users of it.

KRASS Architects and Partners thought the idea was sufficiently controversial to take on without costing them too much in time should nothing come of it other than a few paragraphs in the Yorkshire Post and numerous outraged diatribes in the letters page. They drew up an initial proposal for Mik that satisfied structural concerns and caused minimum disruption to the fabric of the gallery building. Mik sent in his application.

To his amazement, he was awarded some money but only a small percentage of the total cost of the conversion and even then with the caveat that he had to find the rest of the funding himself through other means before he could have it.

Thus began his single-minded pursuit of the Fifth Plinth.

The thing was, he was fairly well known as a performer and artist so his credentials got him through a lot of doors to pitch the idea. The council, although enthusiastic, pleaded poverty but promised help in other areas such as, contacts and expertise should he get the funding (which they confidently predicted he wouldn’t).

It was when the media picked up on the story that things really started to move. The public loved the idea and they particularly responded to the backstory – here was an eccentric character of Leeds trying to create an accessible artwork for the beverage-drinking folk of the city that rivalled the best that the Metropolitan South could offer. He was like a brave Court Fool telling a joke that the common people found funny but the elite found profound.

It was the crowd-funding campaign on social media that finally nailed it. The majority of the money was raised that way and when enough cash had been pledged the council had to honour their promise and grant permission for the pod to go ahead.

So that’s how Leeds got the Fifth Plinth.

The original idea was to have the pod as just another seating area in the café but as soon as it opened, demand for it was overwhelming and the council had to quickly impose a booking system to cope. Residents of Leeds were given priority but as word spread requests soon started to come in from all over the country and then from around the world. An unofficial competition seemed to start – the most flamboyant customer to appear in the pod. One of the characters had so many black feathers on him that he looked like a huge crow drinking tea; another brought in a full-size coffin and placed it in the pod whereupon he stood in it dressed as Dracula while sucking his purchased raspberry juice through a long plastic straw.

Mik ensured he had been the first to exhibit himself in the pod. His outfit was breeches, clogs, a flat cap and scarf. By his side stood a plastic fox that he petted, occasionally pointing out pedestrians as if they were rabbits it was supposed to chase.

Then one day, a new cleaner started work at the café and mistakenly thought the pod was a convenient cupboard for mops and brushes. The following morning, early visitors marvelled at the brilliant indictment of *insert the cultural interpretation best suited to the viewer’s cultural upbringing* as they stared at the cleaning equipment.