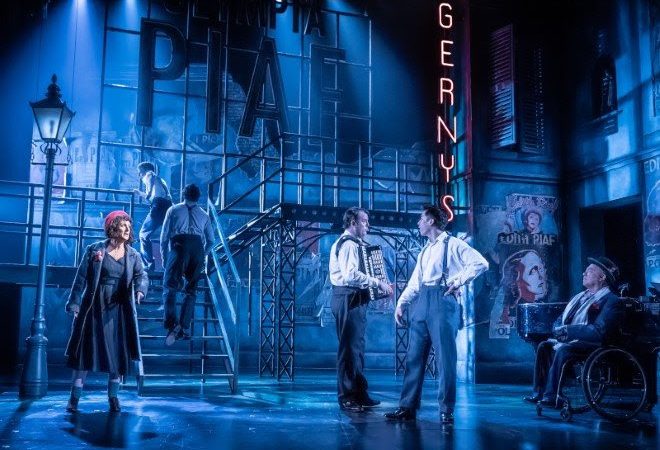 Life may not be too rosy at the moment but PIAF at LEEDS PLAYHOUSE follows the Little Sparrow’s career over 47 short years; a rise from Parisian street singer to Carnegie Hall and a fall back to drug crazed addiction. RICHARD HORSMAN has no regrets seeing it twice …

I’ve seen many good performances at Leeds Playhouse over the years. I’ve seen some best described as adequate. But I’ve seen very few performances that can truly be called outstanding – now Jenna Russell as Piaf is one of them. Scarcely offstage for the whole evening she takes her character on a rollercoaster ride of emotions … ending, of course, with *that* song.

This is a show centred around three strong women who, together, combine the action with excellent singing to carry the evening. Alongside Jenna Russell’s Piaf in the title role are Laura Pitt-Pulford as Marlene Deitrich (yes, that Marlene Deitrich) and Sally Ann Triplett as Toine.

Toine. Short for Antoinette. Edi’s best friend. Tart with a heart and a constant reminder of where Piaf the star has come from. There’s nowt posh about these two as they share digs in a brothel and even share the same punter when Toine “takes over” when Edi’s called to an audition. Be aware it’s certainly not a show for the prudish, with extremely strong language and sex references throughout – but that gives a renewed earthiness to the songs, a reminder Piaf’s style and repertoire owes more to the street and the music hall than the grand cafe and the concert platform. No surprise to learn from the programme notes either that these two actors have been real-life friends for many years.

Laura Pitt-Pulford’s Marlene Deitrich dominates the stage in her scenes and has the very best outfits – a striking blonde with a big personality and a beautiful voice, taking Piaf on a tour of the States and trying without success to shake the French star’s love for the juice.

It was a good call to stage Piaf in the relative intimacy of the Courtyard Theatre. It would be lost in the cavern of the Quarry, you wouldn’t be able to see the tears well up in Edi’s eyes as she internally relates the words of the song she’s singing to her own life. It was a good call to cast Musical Director Gareth Valentine as the club piano player, always there on Frankie Bradshaw’s evocative Parisian set when required and also to lead the set piece musical numbers involving the whole company.

The first half of the show is a raucous, rollicking romp through Piaf’s rise to fame and the outbreak of the Second World War. The second part is more reflective as loss leads to excess and an untimely death. The music is integral throughout and together with a strong supporting cast leads to the close we’ve been anticipating all evening.

And on a personal note this reviewer has no regrets going back with family to see the performance for a second time .. didn’t want them to miss out on this one.

PIAF runs in the COURTYARD THEATRE at LEEDS PLAYHOUSE until 7 August.