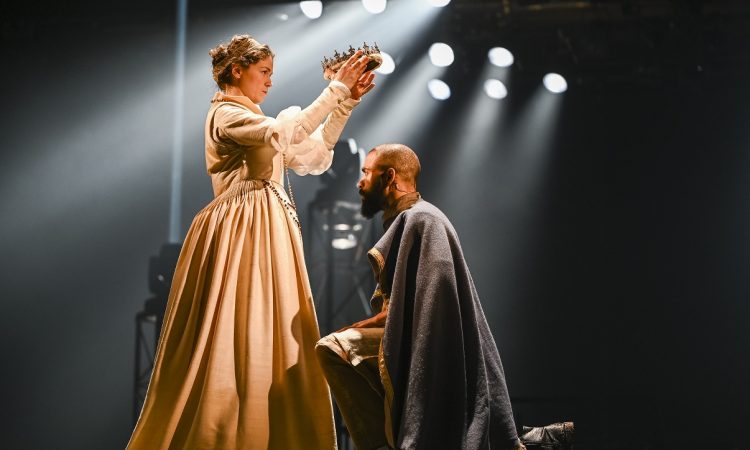 It’s GCSE Shakespeare time at LEEDS PLAYHOUSE with MACBETH the tragedy brought to life in this year’s brush with the Bard – RICHARD HORSMAN reckons it’ll be a memorable experience for students, and indeed anyone who thinks there’s nothing new left to do with the Scottish play.

This telling of Macbeth is visceral. The dictionary tells us that means “dealing with crude or elemental emotions”, of which more later. The term is derived from the viscera – the soft internal organs of the body, including the lungs, the heart, the excretory and reproductive systems. The bloody, squishy and dirty bits.

There’s certainly plenty of blood in this Macbeth. And mud, and dirt, and water. But mainly blood. Lady Macbeth must be getting through a lot of nightshirts during the run. Indeed, Lady Macbeth (Jessica Baglow) is absolutely central to this telling of the tale.

We know she’s given suck to an infant – she tells us in a memorable speech, yet it’s not explicit in Shakespeare’s text what happened to the child.

Director Amy Leach fills that plot hole within the opening moments of this production as the Macbeths bury a babe in arms, apparently on the same heath where the witches will shortly appear. Oh, and she’s pregnant. And may be miscarrying at other key moments of the story. I said there was a lot of blood.

As for the witches. Charlotte Arrowsmith, Karina Jones and Ashleigh Wilder bring menace to their soothsaying whilst also having wet and muddy fun during the “hubble, bubble” set piece (all the key moments the questions will be about are clearly defined and should be easy to recall and comment on as required in the exam hall).

Macbeth (Tachia Newall) is initially sceptical of their promises, but on becoming, as foretold, Thane of Cawdor at the gift of an avuncular King Duncan (Kammy Darweish) quickly gets a thirst on for the crown so as to be king hereafter.

There’s no beating of the breast or vacillating in this visceral production; Macbeth is on board from the off as one half of a power couple determined to do, together, whatever is necessary to land the top job, including bumping off best buddy Banquo (Gabriel Paul) and paying for the slaying of Macduff’s pretty chickens and their dam at one fell swoop.

It will come as no surprise to regular Playhouse audiences to find that the Macduffs (Adam Bassett and Charlotte Arrowsmith) are d/deaf actors integrated into the cast, their signing central to the staging and their words interpreted by others.

Other actors do the speaking for Macduff when required – that said, the inarticulate (and visceral) anguish of the character on discovering the death of King Duncan, and particularly on learning of the slaughter of his family, does so much to heighten the emotion at those key moments – although for me, having Lady Macduff’s speeches as her family faces death relayed in the voice of a child are somewhat less effective.

Much credit should go to Hayley Grindle for a deceptively simple set … a platform on ropes in the middle of the heath serves as a drawbridge ramp, which when raised creates a claustrophobic low-ceilinged banqueting hall for the appearance of Banquo’s ghost and subsequent derangement of our title character, and also a mezzanine for coronations and proclamations. Smoke and spotlights are there too to add emphasis as required, and may even suggest our male and female leads are in some TV talent show orchestrated by the weird sisters.

All in all this is a fast paced, gripping and bloody telling of a familiar tale with enough novelty to appeal to anyone who thinks they know it all … whilst bringing the text alive for those for whom it may be their first experience of live Shakespeare on a real stage.

Also a joy to be back in the Quarry Theatre (the last Shakespeare I saw at the Playhouse was the excellent gender-swapping Hamlet, performed in a draughty scenery dock whilst the building above was being refurbished), and a joy to hear a positive reception from a full audience – not polite applause from a socially-distanced crowdlet.

** Two for one tickets are available on all 7.30 performances in March**