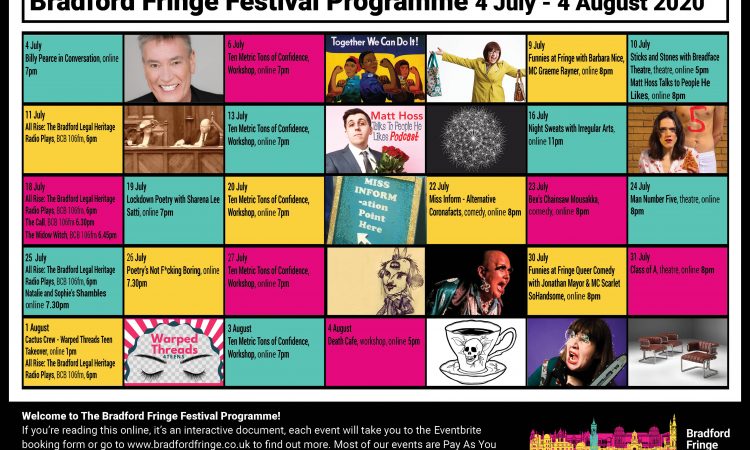 Festivals in a time of corona virus: improvisation and experimentation is what a fringe festival is all about

How have you been culture vultures? How has lockdown been for you? In April, I wrote a piece about Bradford’s response to the corona virus lockdown, the Council’s coordinated efforts and I celebrated the creative Bradfordians keeping us entertained and connected during our isolation.

I was full of admiration for their efforts and had my own good intentions about all I would achieve. I don’t know about you but I got a bit stalled. In April I counselled not to worry about having a bad day or feeling unproductive (and I still think just to get through this is achievement enough). But what have I been doing since March? Where has the time gone? Books have remained unread, training courses not started, paint tins stayed unopened, online events missed.

My enthusiasm for promoting Bradford’s events is in major part a push for me to get out of the house. So online events became less appealing as the weeks turned into months.

Thankfully, the energy and inventiveness of my fellow Bradfordians continues to inspire me and the return of the Bradford Fringe Festival this month has once again shown Bradford’s creatives operating outside the boundaries – improvisation and experimentation is what a fringe festival is all about.

Last year we were blessed with Bradford’s first ever Fringe Festival. The Bradford Fringe Festival is a volunteer led, DIY, grassroots festival and their new website promised a “radical programme of theatre, comedy, workshops, poetry and more … giving artists and audiences the chance to experiment, with new ways of connecting to the arts”.

2020 was set to be bigger and better, and then Covid-19 arrived. With two festival directors pregnant and one unexpectedly premature baby arriving during early lockdown, preparations have been far from straightforward. Priding itself on bringing new work to audiences in unusual venues across the city, the Fringe faced a dilemma – how do you move an eclectic, multi-venue festival to an online space and keep the community grassroots feel?

Necessity being the mother of invention, a creative response was required and the women behind the Bradford Fringe Festival don’t mess about – live streamed events, shows via zoom and radio plays were hastily convened. I spoke to festival co-founder and director Laura Brooks about this year’s festival.

Laura’s enthusiasm and determination is evident as soon as you meet her.

“We’re thrilled to still be able to deliver a festival digitally this year despite theatres and live spaces still being closed. We can’t wait for you to join us on your sofa, for the best night out you’ll have in all year.” she promises.

“All the artists involved have worked really hard to adapt their content for a virtual platform. We’ve been overwhelmed by the response from audiences who have loved being able to join in with some of the shows and see themselves on screen.

With shows like Funnies at Fringe and Lockdown Poetry we’ve been able to connect with performers not just in Bradford but globally with artists zooming in from America and Pakistan to collaborate.”

Staying true to its diverse roots, the Fringe Festival kicked off at the beginning of July with Bradford pantomime favourite, comedian Billy Pearce live streamed in conversation with the city.

Other highlights have included All Rise: The Bradford Legal Heritage Radio Plays – each based on a genuine historic Bradford court case adapted for an old-school style radio play based on court reports from the 14th to 20th centuries; and poetry open mic nights via zoom have featured local and international spoken word artists.

On Saturday night I went to Natalie and Sophie’s comedy Shambles and at first I feared it might be. Turn your mics on and the volume down to 40% we were told. They wanted to hear the audience’s response to the comics, but for the first five minutes all we got was a muffled conversation and a baby crying. A quick mute of some mics and the experience transformed with audience participation and real life laughs. They also cleverly kept each comedian’s set short and snappy in recognition that lockdown has left many of us with limited concentration – keep it at 40% might not be a bad maxim for future online events.

With the festival entering its last week, there’s still plenty of good stuff to come. You can take part in the Ten Metric Tons of Confidence workshop, don’t miss the Queer Comedy night on Thursday, and then there’s Class of A – a dystopian play about euthanasia in a time of pandemic which is just too well timed. The Cactus Crew presents a teen takeover on Saturday, and to complete the circle the festival ends with a Death Café on 4th August.

You can catch some of the performances on the Festival’s YouTube channel and the legal plays on BCB radio. The Fringe Festival is also producing a DVD to bring festival highlights to people with limited internet access.

And the work continues, there are always plans. Post-lockdown, the Fringe Festival will be working from the Delius Arts Centre, you’ll be able to rent studio space, host workshops and experiment with new material. For more information visit the Bradford Fringe Festival’s website: