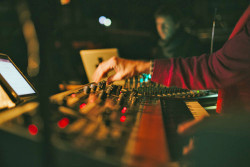 “They were so pioneering. They were creating a very German musical identity from scratch.” Matthew Bourne is outlining the importance of art synth popsters Kraftwerk ahead of his Radioland tour, a radical reworking of the group’s fifth album Radio-Activity released 40 years ago in 1975.

The first to be entirely self-produced at Kraftwerk’s legendary Kling Klang Studios in Dusseldorf, Radio-Activity has long been a byword in electronic cool. “The production values of it are stunning,” says Bourne. “It’s so clear and clean – and that’s something that runs throughout their entire output. I think it is extraordinary.”

The former Perrier Young Jazz Musician of the Year is joined on Radioland by avant garde composer Franck Vigroux, and visual installation artist Antoine Schmitt. The idea was originally suggested by Vigroux when Bourne approached him about working together. As Bourne recalls it, the conversation went something along these lines: “Franck said, ‘We can both improvise, right? So what? I’m not interested in doing that for the sake of it. I think we should do something that’s got a bit more focus. I think we should do something with Kraftwerk’s Radio-Activity.’ So he put that out there.”

Bourne admits that he was unfamiliar with Kraftwerk’s back-catalogue at the time. He knew they were revered by some as key figures in the development of electronic music and reviled by others as being cold and removed. He delved deeper and what he heard surprised him: “What I got most out of listening to their albums is the precision of their sound. There’s no ambiguity at all. There’s a charm to it and there’s a warmth.” 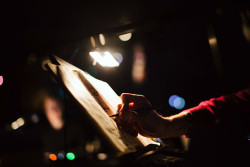 The initial inclination was to reproduce the album live, note for note, sound for sound, but this was quickly abandoned by Bourne and Vigroux as being of little merit. A fan of vintage synthesizers, Bourne says that those used by Kraftwerk on Radio-Activity are something else entirely: either mostly obscure, self-built, or – like the Vako Orchestron, used to create the string and choir sounds – prohibitively expensive. It was Vigroux who drove the shift in focus by embellishing Kraftwerk’s original sound with beats of his own. “He was particularly keen that we would play on the themes of frequency and communication,” says Bourne. “They’ve been really important concepts to hold onto while we’ve been putting the music together and while we’ve been rehearsing.”

With Schmitt joining the project after the first rehearsal, Radioland began to take on a new insistence. “His input was really important in terms of how his visuals shaped how we responded and shaped the entire project,” says Bourne. “That’s what prompted us to think, how do we make it relevant to us as musicians and not just a recreation, a cover version.” With rehearsals scheduled weeks apart to accommodate crammed work-diaries, Schmitt’s involvement meant rhythmic templates for each track had to be worked out in advance to give a sense of the durations required. Not that it will be simply a matter of hitting the play button on the night. “It’s not like that at all,” says Bourne. “He performs the visuals with us. That’s really important. He’s producing these visuals in real time.”

Bourne says that working with Vigroux again – they collaborated on 2007 album Me Madame (Good News from Wonderland) – has been challenging – and, at times, testing. “He’s very blunt,” he says. The Frenchman has brought a fine tuned sense of listening to the sound textures of Radioland which flies in the face of Bourne’s inclination to improvise. “Actually that’s been really good – having somebody else go, ‘No. That’s not good enough,’” laughs Bourne. “Impulsiveness is one of the tools I work with. It’s what makes what I do honest. Being a craftsman is something I find really difficult.”

Bourne’s excitement about Radioland is infectious. There is talk of recording an album version, once someone has figured out how best to incorporate Schmitt’s visual contributions. As for the show, he thinks audiences will be blown away by the sounds he and Vigroux have come up with, but cautions that techno nerds expecting a homespun rerun will have to think again. “Kraftwerk would be horrified to think we’re trying to recreate exactly what they did in 1975.” he says. “There’s a balance to be had. There are some points where we’ve wildly departed, but there’s others where we’ve stayed really true to the original – but only because it’s fucking ace!”