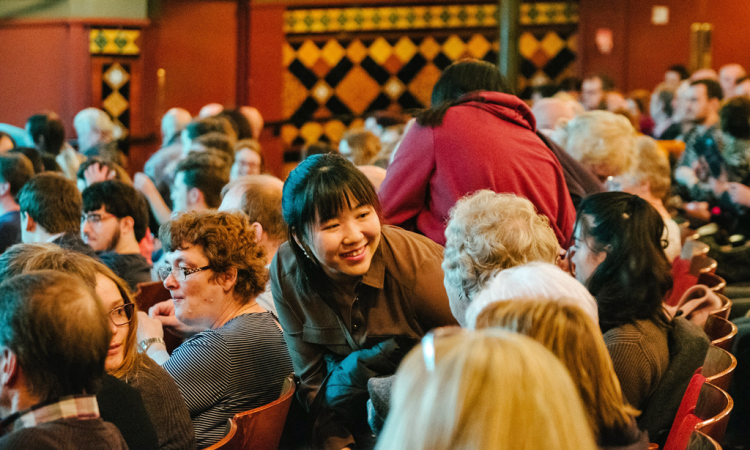 It seems appropriate to be meeting for a chat with Opera North’s Alice Gilmour, and Hayley McColl in a café. The company has just announced its autumn season staging of La bohème, Puccini’s florid account of Bohemian salon society in 19th century Paris, will be the pilot venture in what it hopes will become a series of regular dementia friendly performances.

Alice and Hayley have been liaising closely with colleagues at Scottish Opera, whose dementia friendly programme began in 2016 with The Marriage of Figaro, and Leeds Playhouse which regularly stages dementia friendly events and shows. The cast and all Opera North staff will take part in Dementia Friends sessions to gain insight into what it is like to live with dementia.

The opera will be presented in its entirety and feature reduced lighting and noise contrast. There will be a relaxed approach to audience members coming and going during the show, with extra signage and an increased number of staff on hand, as well as a quiet room set aside for those who need it.

Opera North’s Community Partnerships team will also be taking music from the opera out into the community. Soprano Bibi Heal, accompanied by Miloš Milivojević on the accordion, will perform excerpts from La bohème, along with a selection of other French-style songs. Singer songwriter Joanna Eden will lead a specially themed project across three settings in Leeds.

ALICE GILMOUR (Access Officer) : We’ve been talking about putting on a dementia friendly performance for a while. Opera can be seen as difficult for some people: the lights are out; you can hear a pin drop; it’s not suitable for everybody to access. We’ve got everyone in the company to commit to La bohème, which (has) a simple clear story we think works well, and it’s a beautiful production with a lot to look at.

If people have been to the opera before, there’s a good chance they may have seen La bohème already. It’ll be a midweek matinee performance which Leeds Playhouse and Scottish Opera both found were great for care homes and for older people in general, who might be more inclined to try opera.

HAYLEY McCOLL (Lifelong Learning) : Although (Alice and I) have been working on separate things, there’s been a lot of crossover with what we’re doing. We recently got funding to run dementia pilot projects with [live music charity] Serious.

We’ve proposed a dementia cafe – the idea of a salon based on La bohème – to run in three separate settings around Leeds. We’ve taken the idea to heart and will create a fully immersive experience with as many chorus musicians as possible coming along to make it really exciting.

We’ve done a number of projects with care homes in the Leeds and West Yorkshire area, working with lots of people with dementia and they’ve been singing projects. They responded really well, but we wanted to take it a step further and do new things.

Because this is a pilot project, it’s the perfect chance to push the boundaries a little bit. When we have our new education suite, after the Capital Building Project is finished, we intend to host a regular dementia cafe so there will be a legacy to the project as well.

We’ve been doing schools’ matinees for a number of years now, and when (the company) programmes an opera, they’ll look and think if it’s something suitable to be adapted for that audience.

ALICE : I think that’s the thing really. Next year there’ll hopefully be another (opera) which will be identified as suitable for the same treatment. It comes down to funding to some extent because you don’t sell the whole theatre by any manner of means.

I was at Scottish Opera’s Magic Flute last week and they had 180 (people) in the stalls and dress circle of the Theatre Royal Glasgow which has a 1,500 seat capacity. The person I was with said that was about right. They had extra volunteers and front of house staff because of the number of people who needed extra time to get to their seats; there was space so that no-one was sat next to somebody they didn’t know. It was so beautifully managed.

It’s brilliant of them to share their learning and their experiences with us. I’ve already been in touch with the director to talk about how he might adjust things for that specific performance. In every other sense, we will be keeping the opera as is.

If it was particularly long we would look at shortening it. With The Magic Flute, Scottish Opera (only) kept the main story and a narrator filled in what had happened in between. La bohème feels like something that works, so I don’t think we’ll make use of a narrator, but we will have some helpful advance information packs in an easy to understand format for use in our outreach work.

The interaction with the creative team is fairly normal this time. Dementia Friends will work with the full company and the singers to make them aware of what to expect in that performance. I think they’re all really excited to do it because it’s not often done in opera.

HAYLEY : The starting point is everyone in the company should have attended a session and be aware that dementia covers a whole gamut of things. It’s not just forgetfulness, there’s sensory perception issues we need to be aware of.

The Playhouse has put together an amazing guide to putting on dementia friendly performances which does look at every aspect of coming to a theatre, the front of house experience, break-out spaces, things like that. It’s not just about having that baseline awareness though, it’s thinking about how we can support people.

For the dementia cafe pilot project, we are looking to recruit from local communities, so we have linked up with organisations like Leeds Older People’s Forum, this excellent older adults’ advocacy organisation in Leeds. They have a direct connection to those people who are isolated, as well as neighbourhood networks we can tap into.

We’ve got 150 people a week attending our Over-55 sessions, and within that they’ve got friends and family who know someone who has dementia. They’re great advocates as well, and word of mouth is really strong. They are like our recruitment network.

ALICE : And that’s what we need to be doing from now on, making those connections. We’ve joined the Dementia Action Alliance [a partnership between Leeds Older People’s Forum and Alzheimer’s Society working with Leeds City Council] and they have been really helpful. They’re delighted to have something new to offer and tell people about. It’s about making those connections. I’m keen to find dementia choirs and go out and talk to them, that sort of thing.

Interview with Colin Richmond, set and costume designer, on The Magic Flute.