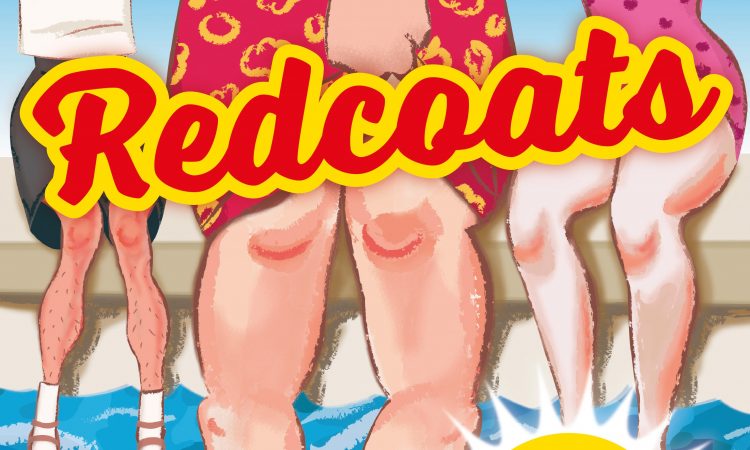 It’s not summer in West Yorkshire without Marsden-based MIKRON THEATRE on tour by road, river and canal boat. This year they have two shows doing the rounds; REDCOATS is NICK AHAD’s paean to a byegone era at Butlins, whilst ALL HANDS ON DECK pays tribute to the women of the Royal Navy in WW2. RICHARD HORSMAN saw both, and came away with a big smile on his face.

If there’s one thing that makes a Mikron Theatre show distinctive, it’s the affection they display towards their subject matter. Last year it was suffragettes and the NHS – this year it’s holidays at Butlin’s and the Wrens; the women who answered their country’s call and joined the navy.

What the two shows have in common, apart from a genuine warmth towards their subjects, are the multi-talented cast (Christopher Arkeston, Rachel Benson, Joshua Considine and Elizabeth Robin) and a simple staging – basically, a platform with steps either side and a backdrop that doubles as a screen for the many quick changes required as the company step in and out of roles.

The cast also double as very able musicians when required, as well as selling the programmes and the Mikron-branded tin mugs; a case of All Hands On Deck in real life as well as in performance, and a friendly informality that suits the informal venues on the tour, everywhere from state of the art theatres to allotment sheds and chip shops.

It was an upmarket chip shop in Guiseley where I saw Mikron’s tribute to the Jenny Wrens. The chandeliered restaurant, once the original Harry Ramsden’s, is now a rather nice Wetherby Whaler. It lent an appropriately fishy and salty ambience to the tale of Lilly and Ginger, two women from very different backgrounds taking on new, demanding, vital and ultimately dangerous roles in Vashti Maclachlan’s tale of a navy still not quite ready to accept and acknowledge them as part of the senior service.

Lilly and Ginger are hampered by seasickness and an inability to distinguish port from starboard respectively. But as they come under increasing stress, not least from lecherous officers and grizzled NCOs sceptical of their abilities, Lilly proves a dab hand at dots and dashes decoding German signals, whilst Ginger, as an accomplished engineer, pilots her tiny craft to rescue shipwrecked mariners after an enemy attack.

The show brings the wartime era to life with both original songs by Keiran Buckeridge, and some witty reworkings of well known numbers ..

“What shall we do with the drunken sailors?/Treat ’em like crooks, and you’re the jailor/They’re cub scouts whilst you’re Akela/<Slap>- that’s your last warning”

was a particular laugh out loud favourite.

There are also Glenn Miller tunes that got feet tapping under the pensioner’s table next to ours.

Will Lilly’s sailor boy come home safely? Will Ginger find the harbour again in the fog? It’s a Mikron show, and with director Marianne McNamara and musical director Rebekah Hughes making sure the pace never flags (even during semaphore class) the audience is bound to leave with a smile on its face and a new found admiration for the Wrens who may have surprised even themselves with what they could achieve.

But it’s the other show in this year’s Mikron programme that’s the real labour of love for prolific Leeds writer Nick Ahad, fresh from the critical acclaim that greeted his wrestling-themed Glory earlier this year.

Butlin’s was where a young Nick spent a family holiday fourteen years on the trot. For many families in the West Riding, an all-inclusive week to a holiday camp in Skegness or Filey was a break from the monochrome world of the sixties and seventies, a break made all the more colourful by the Redcoats who were on hand to make sure everyone was having a good time.

Today’s kids growing up with Instagram and Jet2 can’t imagine the glamour embodied in that bright red uniform, and Nick’s vision brings the two worlds together as Auntie Lynn (Rachel Benson), a 40-year veteran, prepares for her final show before hanging up the red coat for good.

She meets her Destiny (pun intended) when ‘Ents’ send a young lass from head office to document the occasion for social meeja (Elizabeth Robin).

What follows under Jonny Kelly’s direction is an affectionate romp through the history of the British seaside holiday camp from Billy Butlin’s pre-war vision of a carefree paradise for the working man to the heyday of the swinging sixties when performers like Cliff Richard and Ringo Starr performed in Butlin’s shows.

There are plenty of opportunities for the cast to indulge in cameos ranging from Laurel and Hardy to Marlene Deitrich, and the songs (composed by Rebekah Hughes, lyrics by Nick Ahad) document the transformation from “Soggy Foggy Holidays” to the “innovation in our Nation” via the “Standing Instructions” issued to every Redcoat:

“Smile, wave and say hello/Smile twice as hard when the weather blows/ Every Redcoat needs to know/Their standing instructions”.

What became of Butlins? The camp at Filey may have long gone but the holiday centres at Skegness, Minehead and Bognor are still going strong with new investment backing the heritage name – and I must say modern day Butlin’s are missing a trick if they don’t come and see, support and stage this cracker of a fun show from Mikron.

If anything can persuade cynical 21st century audiences to think again about the British all-inclusive holiday experience it’s this; oh, and if anyone from the real life ‘Ents’ wants bits of the story sanitised to meet corporate PR objectives it will just prove how accurate Nick Ahad’s kindly, but barbed, satire of the role is.

Mikron Theatre are on tour, well, everywhere with ALL HANDS ON DECK until 19th October, and with REDCOATS until 16 October. Full ticket information on the MIKRON THEATRE website.