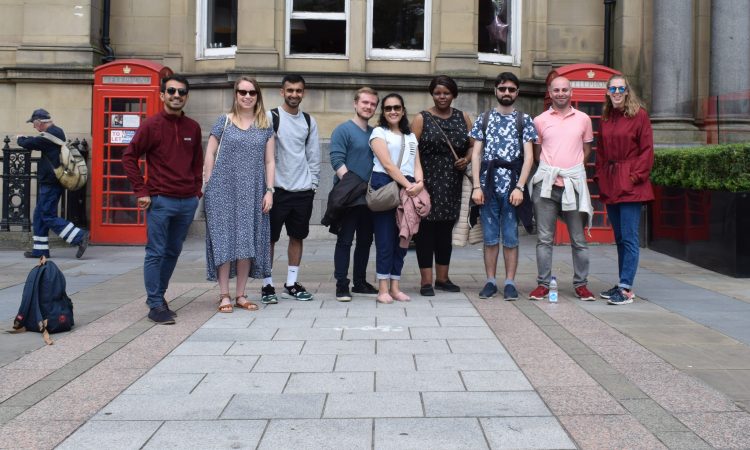 Tales of a City | Everyone has a story… (Photo: Robert Kilner)

‘Everyone has a story. Our story starts here.’ So say Tales of a City Tours, a unique city-centre walking experience where refugees show people around the Leeds nobody knows. ROBERT KILNER walked a few miles in someone else’s shoes.

To borrow from Dr Johnson, when you are tired of Leeds, you are tired of life. Of course, the great man was speaking of London in the 18th century not Leeds in the 21st, but surely this city of ours offers everything anyone could ever want or need in 2019?

Yet, for some, wants or needs are more difficult to come by. Imagine finding yourself in a city, knowing no-one because you have been forced to leave your home behind for another country; things you take for granted, like strong connections to people and place, become more important because they have suddenly become so very elusive.

I find it almost impossible to imagine what that must be like. But after two hours walking with Tales of a City Tours I’ve a better idea.

The stories and headlines I’ve been picking up from politicians and the media about migration and refugees are all fairly one dimensional. Sunday’s walk was anything but. A walk through the city felt more like a walk through someone’s life story.

Tales of a City Tours is the first of its kind in the UK. Offering guided walks led by refugees, it was set up by Emily as a social venture with refugees Lilly and Rawand who also act as the enterprise’s official tour guides.

I learnt new things about my birthplace, my hometown and its landmarks, as well as my workplace. They say ‘travel broadens the mind,’ and that feels especially relevant here. During this physically short tour, I crossed continents: if it is possible to walk a mile in someone else’s shoes, then this is the closest I’ve come to it.

Our tour guide on the day was Lilly who took us places that held significance for me – the street on which I used to work has now been given a sinister new layer of meaning – but held a much deeper significance for her. She has seen changes to the cityscape and to her life which have made her feel able to call Leeds her home. Some of Lilly’s tales of the city made me proud. And I’m deliberately leaving out the details so you can fill in the blanks for yourself.

Spike Milligan in one of his novels (I can’t remember which) thought Dr Johnson was talking bollocks that being tired of his city meant being tired of life. After this walk I felt more alive, and more a part of this city.

The next Tales of a City Tour takes place this Saturday (20th) starting at 1.00 pm. Tickets are free, but booking is essential here.

A City and Its Welcome exhibition is at Leeds City Museum. Telling the stories and experiences of those who have made a home in Leeds over the past three centuries, it shows how they have helped shape the city that we recognise today. Details here.