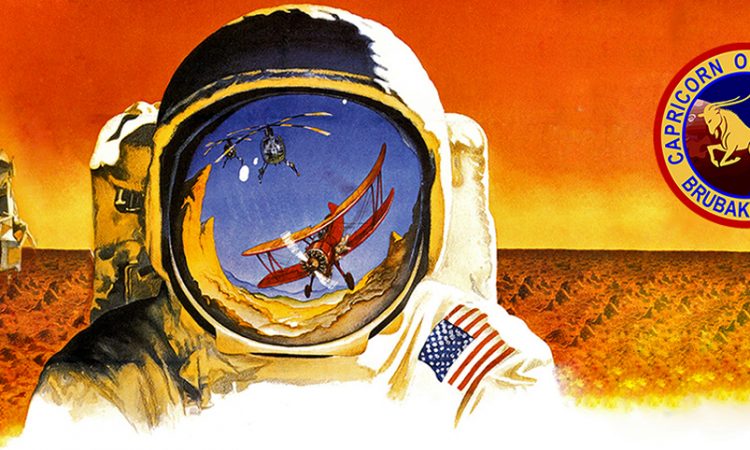 BRADFORD PICTUREHOUSE is screening a series of films to commemorate the 50th anniversary of the Apollo 11 moon landing this weekend. Amongst the selection on offer is Capricorn One, Peter Hyams’ thriller about a fake mission to Mars.

Who is to blame for the parlous multiplex guff that is cinema today? Easy Riders and Raging Bulls, critic Peter Biskind’s thoroughly entertaining account of how sixties countercultural freaks saved then ruined Hollywood, points the finger at Steven Spielberg and George Lucas.

Back in the seventies, Spielberg was a jobbing Hitchcock copyist filling his days directing episodes of Columbo and trying to kill McCloud with a truck, when Jaws unexpectedly birthed the summer blockbuster and Spielberg got to make movies which spoke to the child within us all.

Meanwhile Lucas gambled and won on making more money from canny merchandising than from actual takings at the box office, which comes as less of a surprise than the discovery that he turned down Apocalypse Now to make Star Wars? (Ewoks don’t surf!)

What has any of this to do with Capricorn One, showing at Bradford Picturehouse as part of a season of films celebrating the 50th anniversary of the first moon landing? Released a mere week before Star Wars, the film has much in common with Lucas’s space opera despite having its roots in one of the most persistent conspiracy theories of the 20th century.

Capricorn One eschews the cynical ennui of Hollywood movies made in the eye of Vietnam and Watergate, preferring old-fashioned cornball instead. Yes somebody fixes the brakes in Elliot Gould’s car in an attempt to silence him. Yes, the apartment where a whistle-blower lives is mysteriously redecorated and new tenants ushered in overnight to make it look as if said whistle-blower never existed, but so far, so Rockford Files.

Just what a maverick genius like Robert Altman might have made of Capricorn One’s central premise – live television broadcasts coming from a manned space mission to Mars are in fact fake, filmed in a studio out in the desert – is anyone’s guess.

Altman regulars Gould and Karen Black (criminally underused here as a television reporter with an inexplicably high tolerance level for Gould’s smart-alec shtick) lend the film a certain hipster gravitas, but with a journeyman like Peter Hyams in the director’s chair Capricorn One was never going to be M*A*S*H in Space.

This is America licking its wounds, one year on from a bicentenary celebration which had been marked by division and the Son of Sam killings in New York. The insidious paranoia which drove films like Alan J Pakula‘s Parallax View or Sidney Pollack‘s Three Days of the Condor is mostly missing from Capricorn One, replaced by a story about cost-cutting at NASA in which the dearth of giveaway commemorative binoculars at the official launch party is only the beginning.

Of course the authorities are no use (mainly because they’re in on it), so it’s down to Elliot Gould’s insubordinate investigative journalist to get to the truth. How we would all laugh at that now, but back in the seventies the press really did do things like call corporations and the establishment to account. All the President’s Men was a near contemporaneous account of how the Washington Post brought down Nixon’s presidency, something that could never happen today. Why do you think films like Spotlight and Goodnight, and Good Luck search the past for their inspiration?

One thing Capricorn One shares in common with the best of seventies Hollywood is a great cast. Hal Holbrook, as a villain who smiles and murders while he smiles, is terrific; Telly Savalas wisecracks Gould’s character into a cocked hat and surely is the template for Randy Quaid’s character in Independence Day. Josh Brolin, in a largely thankless role as a hunk of American cheese, shows what a physical talent he can be and though Gould seems to be reprising his Philip Marlowe routine from Altman’s Long Goodbye, he is far more enjoyable to watch than Dustin Hoffman.

Capricorn One may not be the best science fiction conspiracy theory film ever made, but it is loaded with dumbluck charm and fun – which is more than you can say for First Man. The chase scenes are genuinely suspenseful, and the pre-CGI aerial stunts are just insane. Peter Hyams is a way better director than George Lucas (faint praise indeed); if only he’d signed off on Mattel’s Elliot Gould action figure!

Capricorn One is showing on Wednesday 24th July at 6.00 pm as part of a season of films at Bradford Picture House. Full lisitings can be found here.

The National Science and Media Museum is running a series of events to mark the 50th anniversary of Apollo 11. More details can be found here.