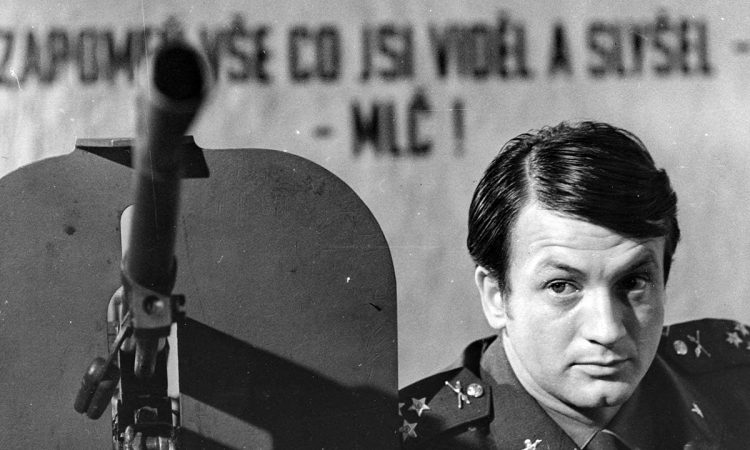 A Wasted Sunday (Zabitá Neděle) is Czech director Drahomíra Vihanová’s startling and rarely seen 1969 film based on Jiří Křenek’s story about a feckless passed-over military commander who toys with suicide on the Sabbath.

Banned in the clampdown which followed the Prague Spring and only officially screened some twenty years later, A Wasted Sunday is a powerful depiction of spiritual ennui and thwarted ambition in a nondescript military garrison town.

Rightly considered one of the great lost films of the Czech New Wave, A Wasted Sunday features a performance of glowering sadistic intensity from Ivan Palúch (in an early screen role). Consumed with self-loathing and oscillating between acts of tenderness and increasingly vindictive cruelty, Palúch’s Ernest gamely shoulders his way through a series of fraught vignettes, even as his mental state unravels.

Visually the film is stunning, its disconcerting dreamlike quality evoked by cinematographer Zdeněk Prchlík’s jagged and restless handheld camerawork. Vihanová lingers on the creased, lived-in faces of her elderly cast with an almost sensuous delight; their expressions admonish Ernest, and it is no accident that Vihanová punctuates the film with doctrinal inter-titles and suffuses it with religious symbolism.

The director’s deliberately repetitive, non-linear editing style calls to mind Jean-Luc Godard and blurs the lines between what is real in the movie and what is not. Vihanová often worked on the final cut of A Wasted Sunday after each day’s filming had concluded and, like Godard whose method of jump-cuts was arrived at under similarly punishing circumstances, seems to have allowed it to evolve a skewed cinematic logic all its own.

Sadly for Vihanová – and for cinematic posterity – A Wasted Sunday would cost her dearly. Being the director of a banned work meant she did not get to make another until 1977. In between she was forced to make ends meet by creating trailers (unofficially) of approved foreign cinema releases.

Now that is a waste…

More films at #LIFF2018 for your diary. Click title for more details.

The Ear ‘Karel Kachyna’s unforgettable, incendiary drama was banned by Czech authorities immediately after its release in 1970 as a searing indictment of life under a totalitarian regime.’

Night Train ‘An underrated classic and one of the greatest Polish films of all time, Night Train takes place entirely in a single compartment on a crowded overnight train.’