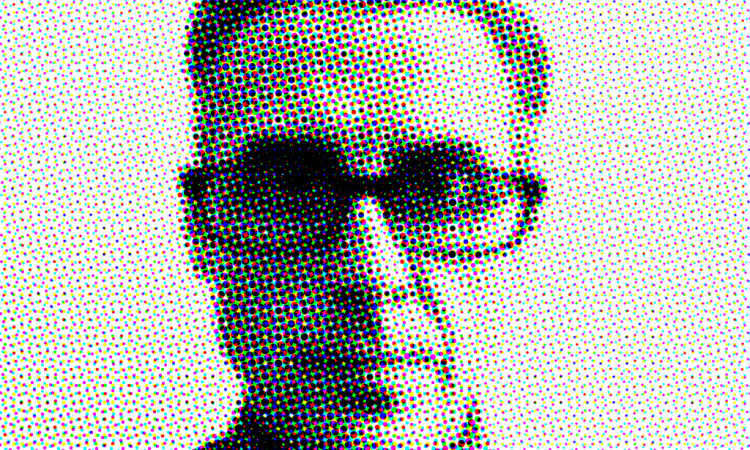 ANDREW GRAVES is the self-styled ‘hardest working poet in the East Midlands.’ Fond of a cultural pun or two, he brings God Save the Teen to the Leeds Library Salon. As NEIL MUDD discovers, he ‘means it, maaan…’

Andrew Graves, a former youth worker turned ‘Nottingham’s only mod performance poet,’ grew up in Sutton-in-Ashfield, a former colliery town four miles outside Mansfield and – until recently – home to the world’s largest sundial.

‘My home town had had the legs kicked out from under it one too many times,’ wrote Graves in The Big Issue, ‘but to call it a cultural desert would have been unkind. After all most of us would have welcomed a bit of sun and sand.’

In the same piece he confesses to probably being ‘a bit of a bell-end,’ dodging a kicking on the occasions he would parade around town in a PVC cat-suit like some charity shop Jim Morrison because ‘people were just too worn out trying to dodge whatever crap Thatcher was lobbing at them that week to bother about me.’

This Saturday Graves brings God Save the Teen to Leeds Lit Fest. What started out as a straightforward attack on social injustice and state-enabled privation morphed into a moving account of his teenage growing pains with an emotionally remote single parent father.

“It’s weird because I never set out to write about my dad,” Graves tells me. “It was always just meant to be about the youth service, but this story about me and dad just started bleeding through.”

The experience proved emotional, but Graves hopes people find the show funny and entertaining at the same time. It is a more common narrative than we realise, I suggest, thinking about my own captious father.

“There is something about being a teen which is a shared experience in a way,” he agrees, “but it’s also the loneliest thing in the world. It’s exciting, funny, boring, frustrating and stupid – usually all at (once).”

It is not all doom and gloom. There are happy memories too. Graves recalls bonding with his father over Steptoe and Son and Inherit the Wind, Stanley Kramer’s McCarthy-baiting account of the infamous ‘Monkey Trial’ in twenties rural Tennessee.

Music was another sanctuary, though in this his father could be infuriating. “He had really frustrating taste in music because he liked loads of brilliant stuff that I still love now like Roy Orbison and Johnny Cash – He got me into Live at San Quentin – but he also liked absolute crap as well like Jennifer Bloody Rush. The Power of Love – Do you remember that?”

I can honestly say it passed me by.

“I grew up in the seventies and really started getting into music at the back end of that decade,” says Graves. “I remember the Saturday Night Fever soundtrack and Meatloaf’s Bat out of Hell being played loads in our house. I think people must have had those records delivered free through the letter box because they were just ubiquitous.”

“My brother was a massive influence on me. He was into a lot of American rock and metal bands. I was well into Kiss as a kid. I loved Kiss Alive II, and then I got into Alice Cooper. I was fucking obsessed, I mean full on. My bedroom was like a shrine to him.”

Graves started out playing in bands, but soon grew tired of the fallings-out. With post-punk came the spectacle of stand-up poets like John Cooper-Clarke appearing on the same bill as The Fall. “I twigged I could do things on my own using my words,” Graves says. “At the time, I had no idea what I was doing. It took me years to come back and do it properly.”

He credits Bradford-based writer and professional tattooist Joolz Denby with giving him that confidence. As a fan of New Model Army (who Denby managed, created artwork for and occasionally performed with), he got to know her. In 2016 the two appeared together at Derby’s Word Wise. “I was cacking myself,” admits Graves.

Other memories of being a teenager in the eighties will mean little to millennials, though they felt real enough at the time. “I grew up terrified. I genuinely thought I would die in a nuclear war – Threads scared the shit out of me,” says Graves.

Some things never change. There was a loathsome morally-bankrupt Tory administration shored up by the hate-fuelled bigotry of an establishment media back then, just as now.

“Well, it’s a mess, isn’t it? No one is talking to each other. Everyone is so busy trying to prove how ‘right’ they are that arguments are being closed down. Closing down honest opinion is never good. We are losing the ability to find nuance. Nuance and context are key to moving forward, I reckon.”

“The main difference between now and 1984 is boredom. When you weren’t being terrified by the threat of nuclear holocaust or whatever, you were often bored. You’re not allowed to be bored now, but boredom is good. Boredom forms bands and writes books. Dodgy governments rely on people not being bored. We need people to sit and stare out of windows – things happen then; ideas get formed.”

Graves is something of a film fanatic, making time to regularly deliver courses and pre-screening lectures at cinemas in Nottingham and Leicester. He has been working on a personal account of working class cinema. “Well, it’s not a comprehensive history or anything, more a labour of love which examines some key films in my opinion.”

Working class cinema is a thorny topic as the BFI’s Danny Leigh can attest. Pressed on the matter, Graves chooses Saturday Night and Sunday Morning, Kes and A Taste of Honey as his three favourites, though the exercise does not sit well with him.

“There is so much out there. I love That Sinking Feeling, This is England, Quadrophenia, Bronco Bullfrog, Babylon, East is East, Cathy Come Home, The Long Good Friday, Scum, Whistle down the Wind and loads more: such amazing, amazing films. I like a lot of new working class films too. Jawbone, written by and starring Johnny Harris is great and Funny Cow with Maxine Peake is really powerful.

I close by asking whether teaching poetry – Graves takes his work into schools – defeats the object. I once interviewed a poet who told me he was sick of explaining his work to students: ‘Fucking Google it!’ he advised.

“It’s a tricky one, innit? I go into a lot of schools as a writer and meet a lot of teachers who are lovely and really good at what they do. I think if poetry’s going to be in schools then it should be from an angle of ‘Why don’t you try it?’ as opposed to ‘This is how it’s definitely done.’ If someone’s into it then, like anything, they’ll seek advice or help if they need it.

“Trying to place poetry (a hugely diverse art-form) within the strict parameters of a curriculum or an exam is not really useful. I’d encourage anyone to have a go at writing, but I’ll stop short of (saying) they’re brilliant. There’s a bit too much insincere encouragement sometimes. People need to be told they’re rubbish occasionally, it builds stamina.”

“My parents never encouraged me ever,” says Graves, “and I think I’m a better poet for it. I mean, I’m an emotional wreck, but at least I get Arts Council funding now. Take that, Careers Officer!”

Andrew Graves performs God Save the Teen as part of the Leeds Library Salon event on Social Justice on Saturday 9th March, from 6.30 pm. Details here.