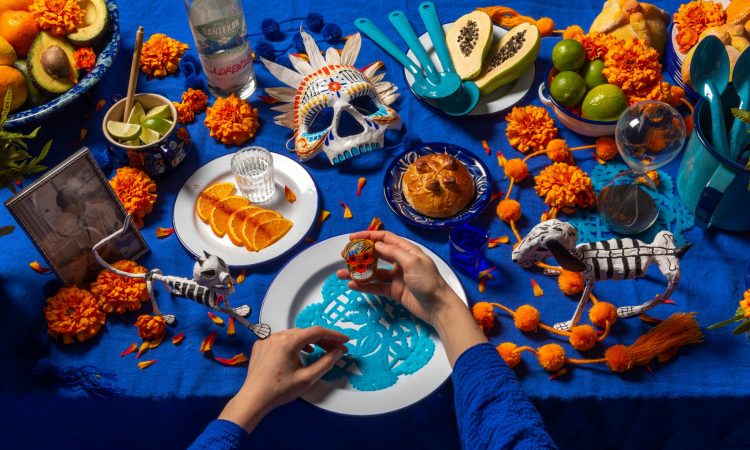 All That Lives, Feasts | ‘Eat, drink and be merry for tomorrow we snuff it…’

I have often thought that when I die (hopefully at a ripe old age having first become a burden to loved ones and a menace to the staff in the nursing home), I would like to be made into a diamond. (They can do that, you know. I’m not entirely sure how – something to do with carbon extraction from bodily remains, but that bit can be left to scientists.)

I like to imagine my descendants bringing out ‘Diamond Lil’ (as I would insist on the great rock being named) and showing it to their children. “This was your Great Auntie Lisa,” they would say, holding it uncomfortably while making a mental note to scrub their hands in bleach afterwards.

“I believe you mean this was my Great Auntie Lisa’s,” the child would correct in the kind of snotty tone you often find in children who grasp the basics of grammar, but are unable to fathom how to wipe their own nose.

“No, no, dear child. This was your Great Auntie Lisa. She insisted on having it made with her remains, and now we’re stuck with the damned thing as the pawn broker won’t touch it!”

“Oh, how horrid!” the small child would gasp. “To think what we could have spent the inheritance money on!”

I’m not sure why my imagined descendants are such awful people (or why they speak like they’re in a Miss Marple mystery), but I do know that having spent an evening in the company of the wonderful Ellie Harrison (artistic director of The Grief Series) and the Mexican artists of El Faro de Oriente, my ambitions for the afterlife have somewhat changed.

All That Lives, Feasts celebrated two weeks of workshops where artists and local people collaborated to build a giant ofrenda, a Mexican shrine to the dearly departed; marigolds, photographs, tiny offerings and handwritten messages adorned it, making a colourful composition of life and death.

The artists of El Faro created papier mache calacas – quirky skull masks and skeletal representations of people from the local community. There was one of Ellie – “Obvs” she quipped during the opening speeches.

We toasted lost loved ones with a glass (or two) of Mezcal and dined on a Mexican Yorkshire fusion menu (Yorkshican? Mexishire?) cooked by Jessica Sweet. Fettle cheese replaced queso fresco and churros were paired with chocolate orange sauce, a nod to local manufacturer Terry’s.

Fusion was the focus of All That Lives, Feasts – finding new ways to express grief and pay tribute to the dead through exploration of other cultures. What I found that night was colour and warmth and hospitality and love. Not gushy or sickly, just a comforting embrace that told me everything would be OK.

I was overwhelmed by a pleasant, fuzzy feeling in my heart (though that may have been from too much Mezcal). And I knew that on my demise I no longer want to be made into a cold, hard stone. When I am gone, I want my loved ones to have that fuzzy feeling too; to come together, eat great food and celebrate those who have gone before.

And, as I will no longer be there to join in, I just hope there are churros in the next life…

Interview with Ellie Harrison on The Culture Vulture