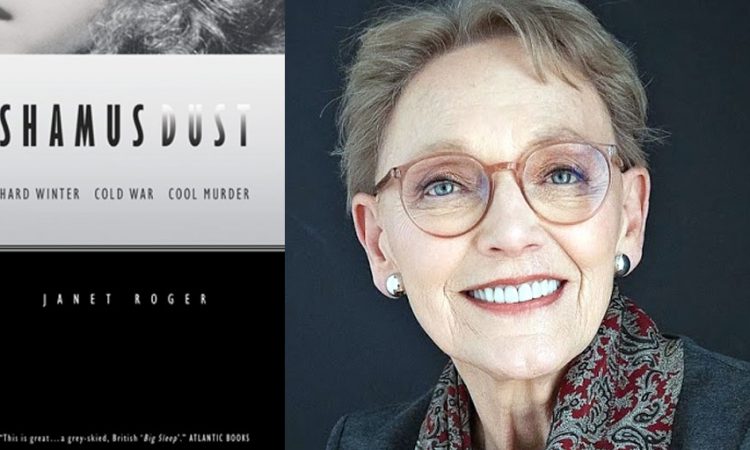 JANET ROGER’s debut crime novel, set in a bombed-out immediate post-war London, is an entertaining tale of murder and double-cross. Its hero, a wisecracking PD who doesn’t know to keep his nose out or his mouth shut, deserves his own series. Review: NEIL MUDD

Stepping into the breach, though she probably won’t thank me for saying so, is Janet Roger, whose novel Shamusdust: Hard Winter, Cold War, Cool Murder is published by Matador Books. A degree in Archaeology, History and English Literature, with a special interest in the early Cold War, helps explain Roger’s choice of a frozen bomb-ravaged London in 1947 as the book’s setting. Her protagonist, Newman, is an insurance investigator turned private eye, who chases down a series of murders, and uncovers grift and a far-reaching conspiracy along the way.

Being an American (‘War’s over, Yank’) Newman gets to wisecrack his way through a series of fist-warming encounters with the locals. Taking a beating comes with the territory. In interviews, Roger has acknowledged a debt to Raymond Chandler, but the dumb lug investigator without a Christian name is pure Gunther – and I’m writing that as if it’s a good thing. Newman is resolutely one step ahead of the authorities, two steps behind the actual killer and a sucker for a sob story – especially when it comes courtesy of a femme fatale in distress.

Around all this, Roger weaves a compelling tale, finding succour in the city’s spectral moonscapes. ‘Take away the angles of heavy timber that shored up its streets and it felt as if all of Wapping could keel over and slide into the Thames … Delivery trucks picked routes through a snowfield where tarpaulins flapped and made pigeons nervous.’

Shamusdust is packed with characters who span the crumbling post-war class edifice and Roger has clearly taken Chandler’s edict (‘When in doubt have a man come through a door with a gun in his hand’) to heart. The first few chapters are a heady blur of murders and scene setting, but when the narrative settles it allows the author some finely judged lyricism. ‘The Pelican was a regulation poison-well for the lower excitements. A place where bubbles will sink in the champagne, and a deal from the top is novel…’

One or two reviewers have carped unfairly about this aspect of Shamusdust, clearly ignoring the literary qualities – and aspirations – of Messrs Chandler, Hammett and Cain, who actively distanced themselves from their hard-boiled contemporaries. Shamusdust is a tightly-plotted switchback ride and, just as Kerr’s anti-hero grew a life of his own across a series of fine historical novels, Janet Roger’s Newman is fit to fill Bernie Gunther’s gumshoes. The good news is a sequel is already planned.