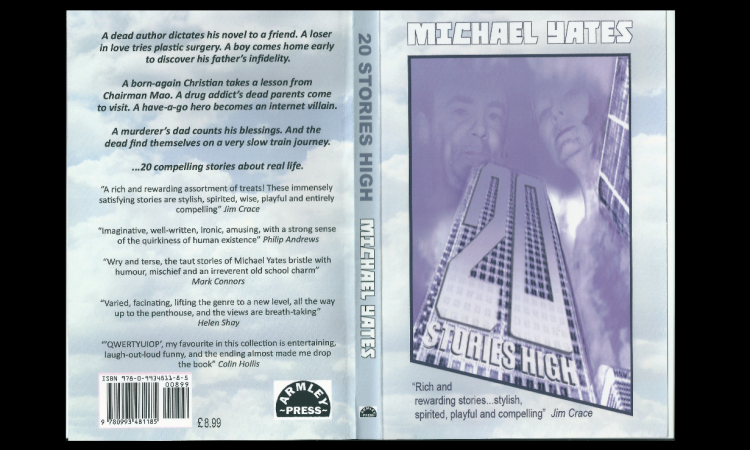 Local author MICHAEL YATES talks about what he reads and why he writes. And plugs his latest book, 20 Stories High.

I’m a writer of fiction, mainly short stories. And, by definition, fiction is the opposite of fact. But can it also be in some way true?

There’s only one statement I know which is perfectly true. René Descartes said: “I think, therefore I exist.” This is true because it’s self-contained. If I didn’t exist, I would simply be thinking I existed. But if I thought I existed, I would still have to exist in order to do so. Good on you, René.

So what about other people then? Do they exist? Or are they not real at all?

One of the six said No. One said Yes. The other four said: How could we ever find out? What they meant was: We can only observe the surface of things. We might have no way of telling whether the Intelligence was real or not.

But if this is true of robots/computers, it’s also true of other humans. How do I know anybody else in the world is real? I don’t.

I can choose to base my life on the assumption that other people have lives and intelligence of their own, that the world around me really exists. Or I can reject it as a dream. But if I reject it, my life becomes meaningless. I have no-one to love or hate, except that I would probably end up hating everybody, as psychopaths seem to do.

So I choose to believe the world exists, that other people have the same intelligence as I do, that they must be recognised and reckoned with. And I even portray some of them in my stories.

A while ago, I compiled a list of the most important books I’d ever read. (I mean important to me, not important to all those people who might not exist.) These are three of them:

Black Beauty by Anna Sewell. I read this story of a horse cruelly treated by its human owners when I was about seven; it was the first time I’d had to contemplate cruelty to the helpless and I believe it encouraged in me the first blossoming of compassion.

The Day of the Triffids by John Wyndham. I read this when I was ten or eleven and I now see it as a partial antidote to Black Beauty. For anybody who hasn’t read it or seen it on TV, most of the human race have been blinded overnight by watching a spectacular meteor shower and they stumble about in a world of darkness, menaced by giant flesh-eating plants. Bill Masen (that’s how he spells it) and a few friends have somehow avoided this fate and at one point they encounter a commune for blind people set up by a vicar who has also eluded Armageddon. But instead of staying to help him, Bill decides they must abandon all these vulnerable folk and look out for themselves. I was shocked. I never believed the hero of a book could behave like that.

Playback by Raymond Chandler. After saving (and falling in love with) the female in peril, private eye Philip Marlowe predictably makes love to her then loses her. But before she goes, she says to him: “How can such a hard man be so gentle?” And he replies: “If I wasn’t so hard, I wouldn’t be alive. If I couldn’t ever be gentle, I wouldn’t deserve to be alive.” I was thirteen and I thought: Gosh! That’s the man I want to be when I grow up. Though I never quite achieved it.

Yes, I know. It’s terrible stuff. I love Chandler, but he was over the hill by then.  What these lines did for me, however, was to bridge the gap between Black Beauty and Bill Masen – I’d suddenly discovered life was complicated.

I’d previously thought of human beings as binary. Some were good, some were bad. They were kind or cruel, honest or lying, brave or cowardly. Now I realised that people had all those different characteristics warring within them.

Why did the Kray twins become gangsters? There are two main theories: the sociological (they were born in poverty) and the biological (they had a criminal for a father). But plenty of people born in London’s East End at the same time as Ronnie and Reggie turned into journalists, judges, policemen, politicians, clergymen and clockmakers. Against the biological argument, it’s worth mentioning the case of Al Capone’s brother James, who changed his surname to Hart and became a police officer and a Justice of the Peace.

I believe human personality can only be grasped through something like chaos theory. We can’t predict how someone will turn out because we won’t ever know all the factors involved. We don’t even have a worthwhile method of analysing what we ourselves do. I don’t know why I do most things. Though I think I know why I write.

I write, first of all, for the same reason I read: because there are times when I have to escape from myself, when I find myself boring and stupid. I need to look at the world through somebody else’s eyes. Reading fiction is one way to do this. Writing it is another.

Reading fiction is therapy; so is writing it. George Orwell said: All art is propaganda, but not all propaganda is art. I say: All art is therapy but not all therapy is art. You can go to a priest for confession, to a psychiatrist for analysis, to Johnnie Walker to get drunk, to cocaine and heroin for an early death. What makes writing fiction much more than these is that it also has to be a discipline. You have to sweat, and a little sweat cleans out the system.

If fiction is the opposite of fact, why do some people talk of the “truth” of fiction? What do they mean?

Possibly they mean the singularity of a fictional story. In real life, we inhabit many stories which interconnect, overlap and maybe even contradict each other. But fiction demands certain rules, of which the first is that nothing within the story should be irrelevant. Look at it like a game of chess: at some point the outcome must be inevitable. Except that in real life, the rules of chess may be overwhelmed by outside circumstance: one player dies of a sudden heart attack or the roof falls in and kills them both.

In this sense, fiction is simpler, purer and more real than reality itself. That makes writing it a lot of fun.

Another fun thing is: writing fiction lets the writer test his favourite ideas. Even after accepting the limitations of Descartes, there’s still a part of me that thinks it knows how things should turn out. But sometimes the characters rebel, like a disaffected teenager who tells his dad: “No, I won’t go to school today!” And that’s a good moment because it shows the story has a life of its own.

Now comes the big sell: I’ve written a book of short stories called 20 Stories High. These include: a dead author dictating his novel to a friend; a boy coming home early to discover his father’s infidelity; a murderer’s dad looking to make money out of his son; a have-a-go hero denounced as an internet villain; a wartime heroine tracking down a serial killer; and a trainee typist in Thatcher’s Britain striking a blow for feminism. Did I know how they’d all turn out when I started? Absolutely not. The people in the story had to show me.

Novelist Jim Crace –  winner of the Guardian Fiction prize, the Whitbread Award, the E.M. Forster Award, the Winifred Holt Memorial Prize et al –  said of my book: “Rich and rewarding stories, stylish, spirited, playful and compelling.” Why did he say that? Maybe because it’s true. Or maybe because I know where he lives. There. We will never know, but reading the book may offer a clue.