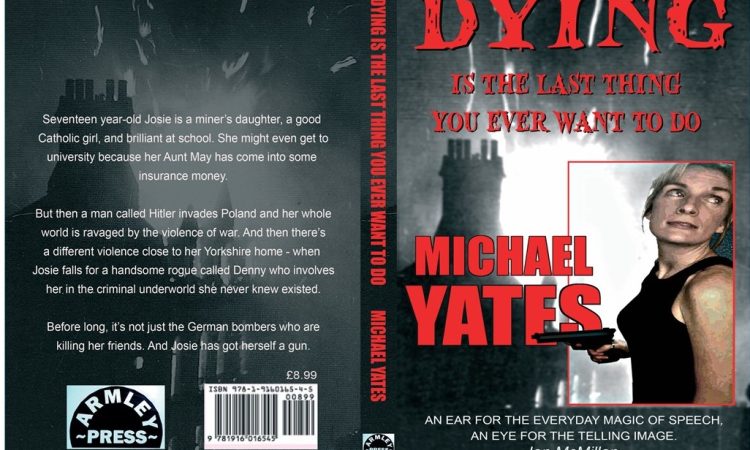 Leeds-based Armley Press is set to publish the novel Dying is the Last Thing You Ever Want to Do by Yorkshire writer Michael Yates.

The launch will take place at Wakefield Labour Club, alias The Red Shed, 18 Vicarage St, Wakefield WF1 1QX, at 7pm on Tuesday April 26. Admission is free.  There will be readings from the book, and a chance to buy a signed copy, price £8.99, if you want.

What’s the book about?

Seventeen-year-old Josie is a Yorkshire miner’s daughter, a good Catholic girl and brilliant at school. She might even get to university because her Aunt May has come into some insurance money. But then a man called Hitler invades Poland and her whole world is ravaged by the violence of war. And there’s a different sort of violence closer to home when Josie falls for a charming rogue called Denny who involves her in the criminal underworld she never knew existed. Pretty soon, it’s not just the German bombers who are killing her friends. And Josie has got herself a gun…

Is it a good read?

Yorkshire poet Ian McMillan says of the book: “Michael writes with an ear for the everyday magic of speech, and an eye for the telling image that will nudge a story along.” And novelist Jim Crace, winner of the Guardian Fiction Prize, says: “This Home Front thriller, in which several plucky women take on the shady side of Yorkshire during World War Two, is gripping and authentic.”

Michael says: “I wanted to write a thriller with a bit of sex and violence, some unexpected twists and turns, and a few good jokes along the way. I set it in a time when the world was topsy-turvy: murder was still punishable by hanging, but patriotic Britons won medals for killing Germans.”