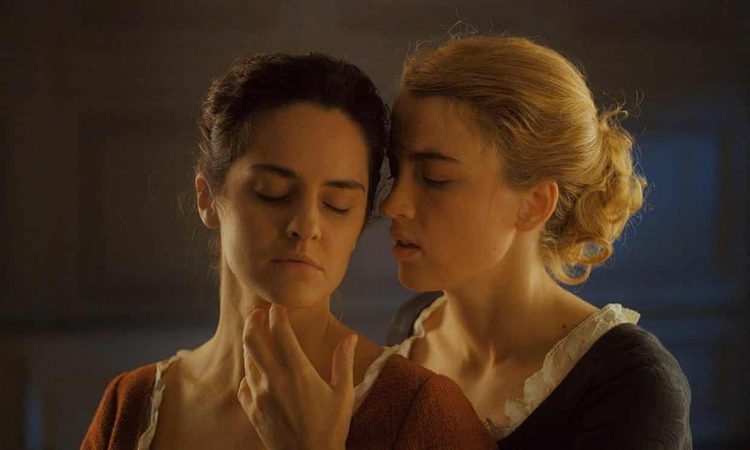 Burning with desire – Portrait of a Lady on Fire

On an isolated island in Brittany at the end of the eighteenth century, artist Marianne (Noémie Merlant) has been asked to paint a portrait of a young woman due to marry, under the guise of being a ladies’ companion. The beautiful Héloïse (Adèle Haenel), who has just come out of a convent and is recovering from the loss of her sister, has refused to sit for previous artists. So, under instruction from Héloïse’s mother, Marianne must paint her in secret. Committing her furtive glances on their daily walks to memory, she constructs a portrait for Héloïse’s prospective Italian husband. But glances eventually develop into something more intense between the two women.

There are elements of a ghost story here too, of things unknown and untold, and a feeling of impending danger around every corner. As the wind batters the desolate beach that Héloïse craves to walk on so much, you feel she might throw herself with abandon to the mercy of the all-encompassing elements at any moment. She’s always one step ahead of Marianne, never quite within reach.

This is a female dominated film, and a story told with a female gaze. Men are incidental in the story, on screen for mere seconds and with a handful of lines. For much of the film it is a three-hander, as the relationship between Marianne and Héloïse develops they also help the maidservant Sophie (Luàna Bajrami) with a personal issue, intensifying that feeling of female solidarity that also runs through the film.

Beautiful and profound, this is a film that gives shivers of pleasure and of pain, as we drift towards the inevitable outcome. Like Marianne and Héloïse, we experience an emotional journey of discovery.

Portrait of a Lady on Fire is due to be released in the UK in February 2020.