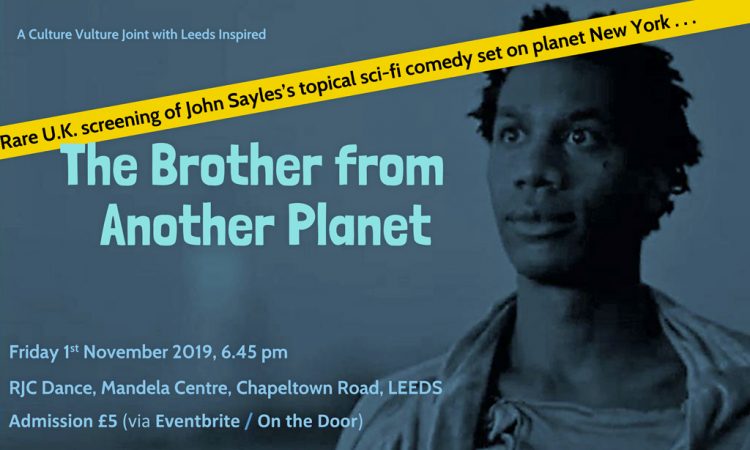 We’re having a rare screening of JOHN SAYLES’ 1984 classic The Brother From Another Planet. Which sets PHIL KIRBY off on a ufological ramble.

Flying saucers come and go, frequently over Port Talbot if you believe the tabloids. But, according to an article by Ben Macintyre in The Times the other day, Mysterious Case of the Vanishing UFOs, visitors from outer space may have come and gone for the very last time.

We’ve just lost interest, apparently. UFO sightings are well below what they used to be, and hardly anyone claims to have been abducted anymore. Organisations that investigate the phenomena are disappearing faster than the warp drive on a Martian mothership.

He blames the internet. And fake news. Plus the smartphone.

It’s a fair point. If you had the (mis)fortune to bump into a bug-eyed creature from Zeta Reticuli – what they call in the business a UABE, an Unidentified Anomalous Biological Entity – and didn’t grab the opportunity to snap a selfie then it can’t have happened. Who would believe you? Even if you did share a blurry, jittery video of a strange object you saw zipping about over the rooftop of the local retail park, the web is crawling with people whose only aim in life is to expose, mock and debunk that kind of nonsense. And the rest of us have been neck deep in so much fake news recently we’ve simply stopped swallowing each and every questionable morsel of garbage that floats through our time-line.

Aliens are just so last century. They are about as relevant as Betamax, bell bottoms, and the VW Bug.

I can’t fault Macintyre’s argument as far as it goes. But it’s worth pointing out he wrote a very similar article over a decade ago (I’m being generous, he’s lifted whole sentences, quoted the same examples, and even repeated the old jokes in his latest piece) UFOs: an Undeniably Fading Obsession.

A couple of years after he wrote that the UFOs made an undeniably impressive reappearance, and the number of sightings between 2012 and 2014 were the highest ever recorded. Macintyre fails to mention that.

(Maybe the UFOs have there own reasons for coming and going. It’s nothing to do with us or what’s happening here on this tiny fleck of dust on the outer edge of a minor galaxy in the middle of nowhere in particular. If they don’t turn up it could be because they are simply bored of us. Or misread the space map. Maybe they have lost their grant funding… there’s austerity in outer space too.)

His oddest claim is that “Governments have lost interest in the subject,” quoting Donald Trump’s answer to a question about the recently declassified videos which apparently showed US Navy pilots chasing a formation of unidentified aerial phenomena (the “tic taks”.) Trump may have been “insouciant” about the fact that these things could outfly his country’s most advanced fighter aircraft, but the Navy certainly wasn’t. They were forced to draft some new guidelines detailing how encounters with UAPs were to be reported and analysed, in order to “destigmatize” them. And the Pentagon officially admitted they were investigating UFOs.

But it gets even stranger. A couple of days after Macintyre published his latest UFOs are over piece, the US Army signed a contract with an outfit called To The Stars Academy to investigate several pieces of alien spaceship… and I’m not kidding. This is possibly the most bizarre story I’ve read in years involving some incredibly odd characters – TTSAAS was set up by former Blink 182 frontman,Tom DeLonge; it employs amongst others the former chief of Lockheed Martin’s Skunk Works, the guy who used to run the Pentagon’s UFO investigation program, and a scientist by the name of Hal Puthoff… if you’ve ever seen Stranger Things he’s one of the inspirations behind Dr. Brenner, so quite an interesting chap.

My guess is that contrary to Mr Macintyre, UFOs will be coming back with a bang. If for no other reason that they are an excellent cover for secret military hardware testing (I’m not being paranoid, they’ve done it before.)

But the main reason I think flying saucers will be swarming back into our skies sooner than you think is that they are simply fun. And make great film.

One of Ben Macintyre’s arguments that I partially agree with is that interest in UFOs is often driven by popular culture. He mentions that the number of British UFO sightings almost doubled after the release of Close Encounters of the Third Kind in 1977. Which is undeniably true. But the opposite is just as true; popular culture is influenced by the UFOs. A good example being the very film he puts forward as evidence – production designer for Close Encounters based his alien designs on descriptions he’d received directly from scores of witnesses, and of course even the title of the film and a lot of ufological detail comes from the work of Professor J. Allan Hynek, who was Spielberg’s official UFO advisor on the film.

Strangely enough Spielberg’s next film E.T. was originally going to be called Night Skies and was based on a famous UFO incident in a rural farmhouse in Kentucky in 1955 (Kelly-Hopkinsville) “where a farm family reported little spindly aliens attacking the farm… they basically huddled together for survival.” (From an interview he gave to Entertainment Weekly in 2011.) Rick Baker, who was the designer on American Werewolf In London was brought in to design the nasty little alien critters, and writer/director John Sayles went to work on the script, which to me does sound a heck of a lot more interesting than the final product.

Which eventually brings me round to the whole point of this ufological ramble. John Sayles directed the 1984 movie, The Brother From Another Planet. It’s an interesting film for a number of reasons, one of them being the fact that it features the first ever Men in Black of UFO lore. Just as the designer of Close Encounters relied on direct testimony (you don’t have to “believe” in order to translate the experience to the screen) Sayles relied on depictions that he’d found in the literature, likely from his research into Night Skies. In the film the MIBs are creepy, threatening, robotic figures, just as they are described by people who have allegedly encountered them.

The most notable feature of the film is perhaps the reason why the alien “brother” ends up coming to visit earth. Unlike in the majority of alien movies he’s not come to invade or exterminate, and he’s not here to lecture us about cosmic brotherhood and the threat of planetary catastrophe. And, if you want to find out what that reason is then we’re having a rare screening of The Brother From Another Planet this Friday (1st Nov.) 6.45 at RJC, Mandela Centre, Chapeltown Rd. Just £5 in advance, or pay on the door.

See you there. Or we’ll send the MIBs round.