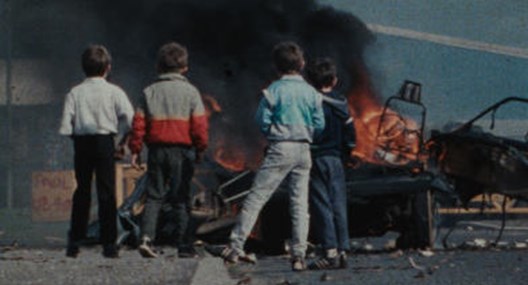 A fiction of who you might have been. ANNA CALE finds much to admire in personal political documentary The Image You Missed, showing as part of #LIFF2018.

With his 2018 documentary The Image You Missed Irish director Donal Foreman presents a touching portrait of his own personal journey of discovery as he traces and makes sense of the relationship he missed out on with his own filmmaker father, who was largely absent from his life, yet captured fleetingly through his work.

Presented as ‘a film between’ himself and his father Arthur MacCaig, Foreman’s documentary essay uses unseen imagery spanning over 30 years to create a patchwork history of the Northern Irish Troubles, which his father documented in his work over many years. The film utilises the work of both Foreman and MacCaig, but also found footage and still photography from the period. It demonstrates the importance of imagery in documenting social change, but crucially it highlights the different interpretations of the same history from different perspectives.

Foreman’s film is a candid personal journey of a lost connection, but it is also an evocative piece of social history. Often unflinching in its use of footage, the pace of change is interwoven into the fabric of the film, and he leaves the audience alone to take it all in.

This is a poignant study of an absent father as the filmmaker tries to make sense of ‘a man I didn’t know’, but it also serves as a clever social document. There is a fleeting shot of a note in the margin of a document towards the end of the film which captures the feeling of this documentary, ‘ghosts of the past are ever present’, and in The Image You Missed both director and recent history are laid bare before us with powerful effect.