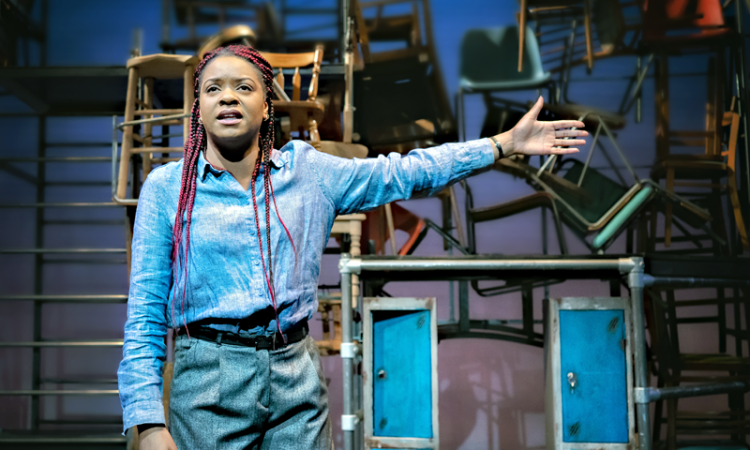 In a devastating account of one family’s grief, KIZA DEEN gives an acting masterclass at Leeds Playhouse. Review: JAMES FOUNTAIN

In the eleven years since Random was first performed at London’s Royal Court, there have been thousands of victims of knife crime across the UK.

The action begins with the everyday and the humdrum. Mother cooks breakfast porridge in the kitchen, notices birds sweetin’ in the trees and her daughter dressing like spring still strugglin’.

The poetic phrasing invites parallels between life’s natural cycles inside and out. Obisesan’s insistence on such a rich use of Caribbean dialect roots the audience within these natural cycles and provides stark contrast to the unnaturalness of the death which is at the play’s core.

Random is not without its moments of comedy. Deen imitates a teenage boy refusing to get up for school while his mother gently chides, ‘Just how does he make a uniform not a uniform?’

It’s an affirmation of the beauty of daily life which sets up the audience for a fall. The final twenty minutes are a series of heartbreaking vignettes.

Sister seeing Brother’s body ‘all prettied up’ wonders, ‘How can you pretty up a dead face?’

The knife’s point of entry – ‘the killer cut’ – is ‘a perfectly round, small hole. Easy to miss.’

Back home, the news already broken, friends grieve and someone sings ‘some dry R’n’B tune as a tribute.’

Mother asks, ‘You sure he was dead?!’

In Brother’s room the PC has been left on standby.

We have come full-circle, back to the everyday and the humdrum; back to the natural cycles of life. Now ‘the house is so quiet,’ the sun has ‘done for de day. Dog still barkin’ de hell outta de street.’

Random is showing at Leeds Playhouse until 16 February. Details here.