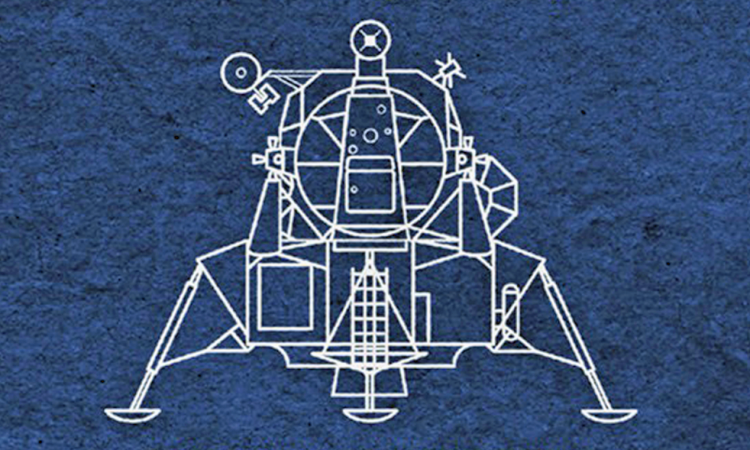 The Lunar Age commemorates 50 years since the Apollo 11 moon landing by taking a giant leap into the unknown. Curator ROB from fourteen pulsars talks to NEIL MUDD. Plus he’s got space snacks…

When we meet to talk about The Lunar Age (J0826+2637), RoB from fourteen pulsars breaks open a foil-bag of Astronaut freeze-dried strawberries. They taste like the real thing, but have the plaster-cast texture of meringue.

“They’re not super-high energy or anything like that,” RoB says. “I remember having some once before and thought they might be fun.”

They certainly are, though the astronaut snacking away on the front of the packet troubles him a little. RoB points out they’re still wearing their helmet and that the suit comes from one of NASA’s later non-moon missions.

Soon it will be fifty years since Neil Armstrong, Buzz Aldrin and Michael Collins climbed aboard Apollo 11. To mark the occasion, RoB has curated The Lunar Age, a live audio-visual show at Hyde Park Book Club. It is similar in vibe to his Yuri’s Night event last year, which marked 57 years since Vostock 1 carried Cosmonaut Yuri Gagarin into outer space.

The fascination with space took root early. Growing up in Harrogate, one of RoB’s neighbours had worked for NASA as a technician on the space shuttle programme. “It was the stories,” says RoB, “the first hand accounts. He didn’t get into space: to do that is the pinnacle of a very large team and they are fully aware of that.”

RoB also travelled with his family to Florida’s Kennedy Space Center in the early nineties. “They have a Saturn V there and it’s amazing. To see one of those things up close – the amount of work that goes into (them) – they’re big, big things.”

The technology and scale of the enterprise are what impresses him most. “Landing on the moon, sending robots to Mars or Voyager probes off into deep space: you can only be amazed by the things we’ve achieved. Then there’s the personality aspect, as well.”

“They were very fit gentlemen,” RoB says, “and none of them was particularly young at the time of the mission.” [All three were 39 years old, in fact.]

1969 is a world away from the one we live in now. His parents’ recollections of it are “sketchy at best,” so The Lunar Age represents an audio-visual response, rather than some slavish recreation.

RoB has collaborated with independent film programmers Laura Ager and Alice Miller, who present obscure Czech fantasy The Fabulous Baron Munchausen at The Little Reliance Cinema earlier in the week. On the Saturday at Hyde Park Picture House, children’s film Muppets from Space and the new Armstrong documentary will directly precede RoB’s show .

“If you wanted to, you could make an Apollo 11 day of it,” he suggests. “That’s how I put it together. It was something which I would find interesting and not something that was going on somewhere else as well. I’ve tried to work with a mixture of people, some of whom I’ve worked with before, and some who I’ve not.”

Four acts each chronicle different stages in Apollo 11’s mission. RoB invited them to surprise him. “I told them not to tell me what they were doing. No-one knows completely what’s going to happen, including me. An improvised or semi-improvised approach is more interesting in music. How you then combine that with video creates something really special for an audience.”

The choice of venue was key as well. “The Book Club has grown so much from when it first opened. If a dozen people turned up to those early gigs it felt really packed, but it’s so, so different now with the new space downstairs. The atmosphere is really good and the opportunity to show visuals is so important to this event.”

“People into space might hopefully discover they like the sound of analogue synths or look of experimental cinema too,” RoB says. “That’s the beauty of Scalarama. People go to one event, like it, then go to another. It’s what being part of the DIY community is hopefully about: new people coming along and meeting others like them. That’s how I see it anyway.”

The Lunar Age is worth making a giant leap of your own for. The countdown has begun…