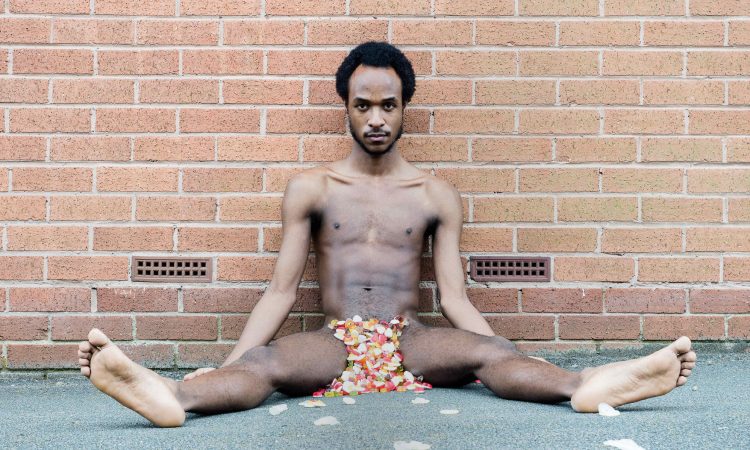 With sell-out performances of his show IDOL at Transform19, JAMAL GERALD wonders if success means he has outgrown his home city of Leeds. Inerview: VANESSA MUDD.

Jamal Gerald’s karaoke song is Queen’s Don’t Stop Me Now, even though he “can’t sing for shit!” “If I could, everyone would know!” he says. “I wouldn’t be shy!”

With three acclaimed shows, including sell out performances of his show IDOL at Transform19, and bookings at key venues across the country, the 25 year old performance artist is self-deprecating, yet curiously unabashed.

Does he think other artists might be jealous? “Oh yeah, definitely. I am young, black, have achieved a lot in a short space of time, and I know that pisses some people off. I can feel it.”

Despite having a degree in performance, Jamal is not formally trained. Some training would have been very useful at the beginning, he laughs. As a thirteen year old, he wrote and performed poetry with Leeds Young Authors, a creative writing and performance group based in Chapeltown.

Jamal would later graduate to poetry slams in the UK and US.

Did he enjoy poetry at school, I wonder? “I hated school!” he says. “Fucking hated it! Fuck education! Ha! It’s great for some people, but it wasn’t for me.”

Nowadays Jamal usually only writes poetry when he’s sad. “I feel (it) is very ingrained in my writing anyway. I can’t escape from it. My writing in IDOL was quite poetic as it’s how I write.”

IDOL follows FADoubleGOT, a combination of live art, storytelling and spoken word, and Dogmatic which proved difficult to perform and caused controversy.

“I was moving from telling stories,” Jamal says, “then I’d facilitate audience discussions about white privilege and racism. I had to keep switching roles, and it was a lot to handle. I feel like a lot of people were really pissed off with me. Many of us live in echo chambers. (We) can’t handle different types of opinions. (We’re) not very comfortable with being challenged.”

On Facebook at the time he says he was very bold and honest. “Some people responded in a negative way or tried to challenge me, which I thought was fine. Some people said, ‘Jamal, you can’t say this,’ but that’s bullshit! I think people should be able to say what they want, but should be prepared to be challenged on it.”

Apart from Transform every two years and Live Art Bistro, there aren’t that many in Leeds willing to support independent artists producing contemporary work. Jamal tries to see as much as he can by other artists, but often finds he has to travel beyond Leeds.

“I don’t come across many ambitious artists (here),” he says of the city. “I’m not jealous of any of them. Jealousy can be healthy. It makes you want to be better. I know it does for me.”

Jamal is starting to feel he’s hit his peak here with IDOL. “Have I outgrown Leeds?” he wonders, before adding with a knowing smile. “How can I say this without sounding like a dickhead?”

Jamal has a one-to-one performance piece called You See… which he can take anywhere. A private conversation based around six cards tackling aspects of privilege, he often doesn’t charge if someone really wants to do it.

“It is a very challenging piece of work to do, because I’m holding onto people’s bits of baggage. I’m really getting them to talk about things that some people don’t get the chance to talk about.”

“Yeah, I guess you could say that. Even though it’s difficult, it feels right. It feels like it needs to be done. It’s a piece of work I can do for the rest for my life as the topics I’m exploring are timeless.”

“I’m very interested in privilege, and I notice that only some people are comfortable with discussing these topics. I wanted to create something where people could be comfortable having these discussions (because) I feel like these conversations need to happen.”

As the interview draws to a close, I wonder what he would create if had no constraints? His answer is very definite: “A musical! Not a West End or typical Broadway show – even though I love those. I’d want to push musical theatre and see where it could go.”

If Jamal is looking for a name for his project, he could do worse than call it Don’t Stop Me Now.

As if anybody could!

Review of IDOL at Transform19.