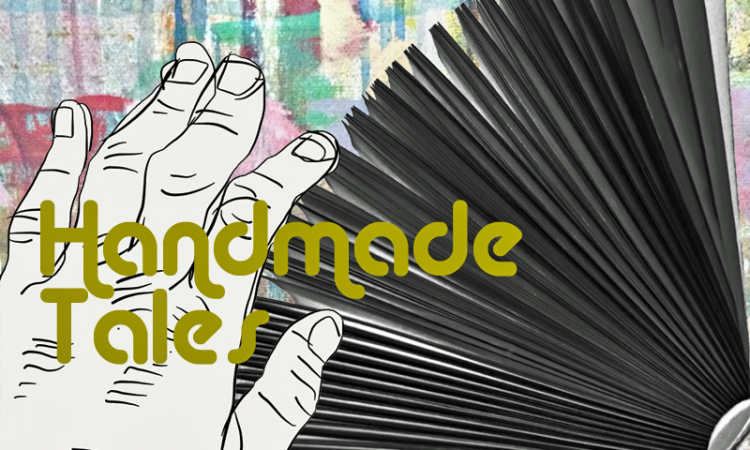 Our look at the small press in the North continues with MICK McCANN and JOHN LAKE of ARMLEY PRESS. Words: NEIL MUDD

Mick McCann and John Lake are a double-act in the classic tradition. But where Martin and Lewis hated each other’s guts, a genuine affection exists between the flamboyant, sweary McCann and the quietly spoken, purposeful Lake.

The two of them go way back. They were in Leeds band Hang the Dance together in the mid-1980s, looking to capitalise on post-punk’s last hurrah by harnessing their inner funk Goth.

“We were sort of indie rock,” remembers Mick. “We had our moments – shit pasty white boys with guitars…”

“…It was that kind of band,” says John. “Our vocalist [John MacHeath] was interested in all these literary influences like Sartre and Kerouac which came through in the music and lyrics…”

“We had some good stuff,” Mick interjects, before adding with daft disregard. “I wouldn’t listen to it though. It’s shite!”

The pair runs Armley Press, a ‘punk-publishing’ venture set up as the ‘antithesis of mainstream London media and publishers.’ Mick is the showman of the partnership – prone to picaresque digressions and self-mocking outrage – while John is more gently insistent – for which, read focused – and ruminative. One is Yin to the other’s Yang.

“I do things like contacting the press and all that,” says Mick. “John is strictly about the authors and the back-end; I’m more ideas and themes, blagging and bullshit promotional type stuff rather than getting down to actually reading anything.”

Armley Press was born of love for Northern stories and a shared refusal to let the bastards ground them down. The two decided to kick against the pricks and publish a Ray Brown novel about the Miners’ Strike after it was dismissed by one London publisher as a ‘sordid little story from a dirty Northern town.’

It is this connection with the North – specifically Leeds – which has defined Armley Press from the outset.

“I’d start all sorts of different bits and pieces,” says Mick. “One minute I’d be writing a harrowing play and the next thing would be a skit comedy, and I’d just do little chunks, never actually finishing anything off.”

“But a friend of my wife asked me to print off a thing I’d been writing about being a young kid in make-up not trying to get picked up by forty year old blokes on the bus, in case they found out I was a male and kicked the shit out of me. She loved it, so I carried on writing little chunks of it for her before I realised I’d got half a book written.”

That book was Coming Out as a Bowie Fan in Leeds, Yorkshire, England, Mick’s hilariously candid hyper-local account of growing up in the seventies. “To me it’s just wittering cocky teenage bollocks,” he says, “but people saw things in it.”

For a long time, Mick resisted doing anything with the manuscript, aside from approaching one literary agent who was rumoured to be ‘into all that edgy Northern bollocks.’ Hearing nothing back, and taking a lead from his days with Hang the Dance whose records were all self-released, he decided to publish it himself via the then emerging technology of Print On Demand. Thus was created Armley Press, named for the area Mick calls home.

John’s experiences trying to find a publisher for Hot Knife, part of his Leeds 6 trilogy, were frustrating and ludicrous by turns. “When I started sending that round to agents and publishers,” he says, “there was a lot about it being similar to Trainspotting, even though I’d not read or seen it…” One publisher told him he had ‘originality as a stylist,’ but still rejected the book.

“In other words, you’re not part of that London media literary circle, so why would we even think about publishing you?” Mick chips in.

Ironically John was living in London when he wrote the novel, though he might as well have been living on Mars. “It’s hard to make money from selling books,” he says when I ask why the big publishing houses are so risk averse when it comes to new authors. “I kept being told I didn’t have a high enough public profile.”

“But there’s also a bit of passing the can,” Mick says. “They don’t want to be the one to make a decision, never mind a risky decision. I used to see it at work all the time. People would keep forwarding emails because, as long as they did that, they didn’t have to fucking do anything.”

“In my head, I’d like to think if I was part of the London literati scene I’d be interested in something like (John’s book) because it’s outside what they normally do. It’s about different perspectives and various views of the world, whereas I think they limit it to what views of the world they want.”

We Are Hungry Men

John is the one who reads submissions, commissions new titles and works with authors. I ask what limitations he places on the types of books Armley Press will publish (Mick famously refuses to countenance poetry, children’s fiction or football books).

“My parameters are closing,” John says. “We’re publishing less – maybe only two or three books a year – and you can’t read everything that gets sent to you beyond the first chapter. We’re finding a more unified ethos, but what worries me is that it all tends to be middle-aged white men.”

“That’s the thing,” says Mick. “There’s a female writer who I came across through blog stuff who we’ve been nurturing for the past three years, but if you look at our submissions we get such a small percentage from women it’s unbelievable.”

Could it be the perception of the small press as inherently male? “I think compared to other small presses, we’re quite chaotic. That’s what we’re trying to tighten up slightly,” says Mick.

“One of our writers said to me, ‘Your’s and Mick’s problem is that you’re not hungry for success,'” laughs John. “Now I know what he means because we’re at the end of our working lives and we’re in a position where we’re quite happy just to sit back and relax which can mean we’re a bit too laid back for our own good sometimes…”

“That’s interesting because that’s practically the first thing we say to a new author when we meet them,” Mick says. “‘If you want to sell shit-loads of books, you better get your arse into gear!’ That’s what happened with the Bowie book. It may have come out at a different time, but it’s still our second biggest seller after How Leeds Changed the World. It was just me, getting obsessed and doing all sorts of bollocks to promote it.”

Where Are We Now?

The challenge is what the media conceives about small press publishers like Armley Press. Asked by the BBC’s Book at Bedtime strand to submit work for consideration, it was declined almost as soon as John had hit send. “I can’t help but feel they’re rejecting us because we’re not Hodder & Stoughton or Bloomsbury,” he says.

Mick is less concerned. He’s quite dismissive of the media in general. In any case, sales of his books are always best after local media coverage, he says. Things are looking healthy. Next week they publish Thurso by Wakefield writer P James Callaghan, the first of this year’s new releases with more promised. Mick is talking up entering a few literary contests as well – John’s book Amy and the Fox was listed for the Not The Booker Prize Award a few year’s ago – if only they could be arsed…

Thurso by P. James Callaghan is published by Armley Press in April. A launch event takes place at Red Shed in Wakefield, 5th April at 7.00 pm.

Described by Bloomin’ Brilliant Books as ‘a “makes you think” dark debut’. Thurso by P. James Callaghan confronts heavyweight themes of mental health, marital breakdown and child abuse. Unfolding with the pace and precision of a tightly plotted chase thriller, Callaghan’s depiction of lives in freefall against the unforgiving background of the Scottish landscape puts him in the classic company of John Buchan and Iain Banks.