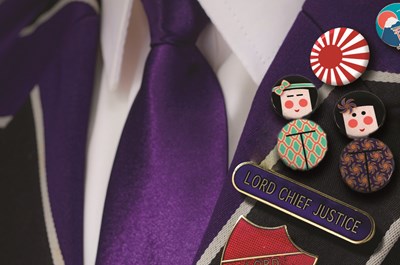 Gilbert and Sullivan, the ‘naughty cousins’ of musical theatre, were never ones to let good taste get in the way of a great show, but in case you might be worried about cultural appropriation, it is we Brits this production of The Mikado has firmly in its sights.

The action has been transposed from medieval Japan to an English school on the cusp of an inspection in 1978. (Why 1978? Well, why not?)  The school’s disobedient staff are determined to carry on with a planned Japanese theme day regardless. It is a modern twist that works well in an establishment run by leaders who no longer teach, but who just ‘steer the sinking ship.’

Opening in understated shambolic fashion, the cast shuffles onstage allowing time to savour all those teacher types from our youth. The costumes are fabulously tongue in cheek and someone has clearly had fun raiding local charity shops!

The joy and silliness expected of Gilbert and Sullivan is evident from the outset. A running visual gag about the play’s Japanese origins – cue Japanese flag, a parasol, even some chopsticks – adds to the ribald slapstick comedy. It reaches its height when an orange ball, with a face drawn on it, is used to represent a severed head in a mock execution.

The staging and character interactions maintain a cracking pace. We feel like the actors are enjoying it as much as we are. The absolute scene stealer is Jason Weightman’s Ko-Ko, here imagined as a PE teacher in co-ordinated knee high socks. Think Brian Glover as Mr Sugden in Kes. When he and Katisha (Sarah Case) perform a dance of love over a canteen trolley their physical dynamic positively fizzes. (Ooer! – Ed.)