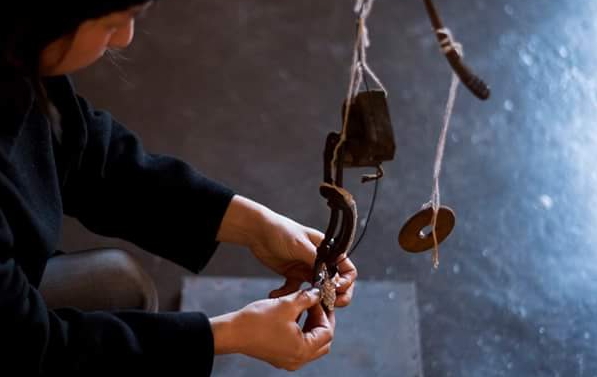 For INTERWOVEN HISTORIES at Leeds Industrial Museum, Japanese-born Huddersfield artist RYOKO AKAMA has been exploring the experiences of migrant garment workers in Leeds through art and music created using historical found objects. She tells NEIL MUDD why she’s not interested in a digital life in public…

When Ryoko Akama was electrocuted recently, her brain registered the shock in the split second before her body was jack-knifed by convulsions, like lightning before a clap of thunder.

Ryoko, who moved to Huddersfield six years ago from her native Japan, is knee-deep in house renovations with husband Yuki. DIY is a recurrent theme. Her singular sound installations and minimalist music interventions frequently employ handmade Heath-Robinson style instruments fashioned out of fragments and small found objects.

Growing up in Sendai, north-east of Honshu, Ryoko watched pop music on television, the Japanese genre known as enka, heavily stylised ballads which use the traditional Asian pentatonic scale and weave overwrought, sentimental tales of love and loss.

As a teenager, Ryoko flirted with punk and hip-hop. “Somehow I got into the underground scene and became a bit of a snob about mainstream music,” she says, “but then I discovered The Beatles.”

Fixated on the idea of coming to England, Ryoko connected with Britpop rather than the pop music coming out of America. “I was already sort of freakish.”

An inspiration from the beginning has been Yoko Ono, not just because of her connection with The Beatles but as a major avant-garde artist in her own right. (Ono was involved with Fluxus in the sixties, notably creating Cut Piece and short-text work Grapefruits). In interviews, Ono has expressed frustration at the gender conformism of Japanese society, a frustration shared by Ryoko.

“In Japan there is a fundamental problem with chauvinism. If you wanted to work as a single female artist in Tokyo that’s one thing, but if you wanted to live outside Tokyo, be married and have children, then that would categorize you as a housewife.”

“It’s very difficult when I go back there for me to feel as an artist in Japan as I feel here,” she says. “Even though people find it difficult to be an artist here in the UK, I have to laugh at them. They really don’t know…”

Ryoko’s work retains an analogue coyness where art and technology intersect. “I call it Grandma’s Practice,” she says. “I’ve stopped enjoying technology, but I really like old and vintage products aesthetically. When I work with old objects, there are things that can be done with them and I really enjoy the idea of that.”

I ask Ryoko if this enthusiasm for retro-technology is specifically Japanese, a form of nostalgia for an age yet to come?

“There are some who embrace technologies with purism,” she says, “but what I do with small found objects and sometimes junk – just bare components in a space – seems to me a different language. I’m just not very interested in the clean aesthetics of this digital world; I find it quite boring that this all happens behind the computer screen.”

Ryoko likes to be surprised and resists imposing any absolute ideas. She has written about her fascination with the ‘defined’ and ‘undefined’ in minimalism, and of her desire to dissolve the boundaries between performance and installation, to strive for ‘an insistent and continuous flow.’

“Expect nothing and then things will happen somehow,” she says. “It seems like everything is connected with the way I live. Sometimes when I’m doing DIY I don’t particularly get a craving to go back to the studio and make something. Everything can be enjoyable in the same way.”

This realisation came while working with French composer Éliane Radigue, an artist who ceased releasing public recordings – but not creating music – in 2013. “She thought it was so strange, this desire to exist in public, and she was so, so right.”

“Everyone has twenty four hours a day. If you start comparing what you have done with other people, of course there must be different struggles. But so long as you are doing, you are living. You are creating something. That is important.”

Ryoko has been reading non-fiction books by female journalists about Afghanistan, Iraq and Syria. I ask if this interest in conflict feeds into the binary tussle between rage and silence in her work (her piece FIR3 builds from a tonal crackle to an intense blistering howl of white noise).

“No, not really. I’m just interested in real stories. I’m reading about North and South Korea because I’m half-Korean and half-Japanese, but I do separate what I read from what I make.”

This Saturday, Ryoko will perform at the closing event in Pavilion’s Interwoven Histories exhibition at Leeds Industrial Museum. It comes on the back of three months reading about and listening to the experiences of refugees, asylum seekers and former garment workers in Leeds. “I’m curious about all these elements happening in people’s lives,” she says.

An installation, loiner or, which figured earlier in the exhibition’s run, was composed using found objects and punctuated by fragments of taped interview. It represented a new approach by the artist: “Having these voices is my first attempt to have some form of reality in my work,” she reveals.

Of the objects she chose for the piece, she says. “The museum had so much in its collections from the factories, products that workers might have used. These had been with them a long, long time without even being touched. I wanted to use these small things.” 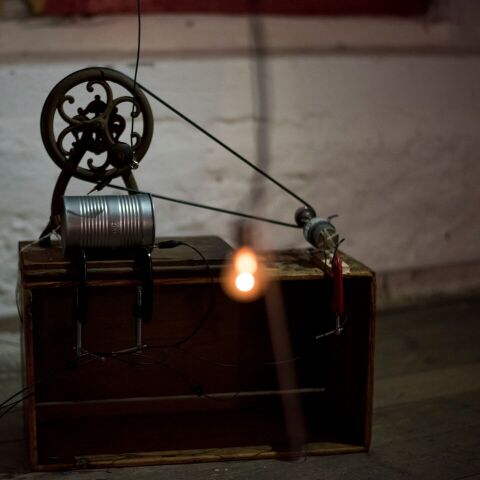 For Saturday’s appearance little is fixed. Ryoko performs with two other musicians, but nothing has been discussed or agreed upon. “We haven’t even decided where to perform. I think it might be outside.”

She says people are free to be bored, to allow their minds to wander, to zoom in on tiny details. “It’s what matters,” she tells me. “Sometimes I think it’s all that matters. By floating a balloon outside, you realise there is a wind… And that’s all I need to happen.”

Throughout the exhibition, Pavilion has been co-ordinating a fascinating blog. We particularly enjoyed reading about the secret history of the city’s sound-systems. The blog can be found here.