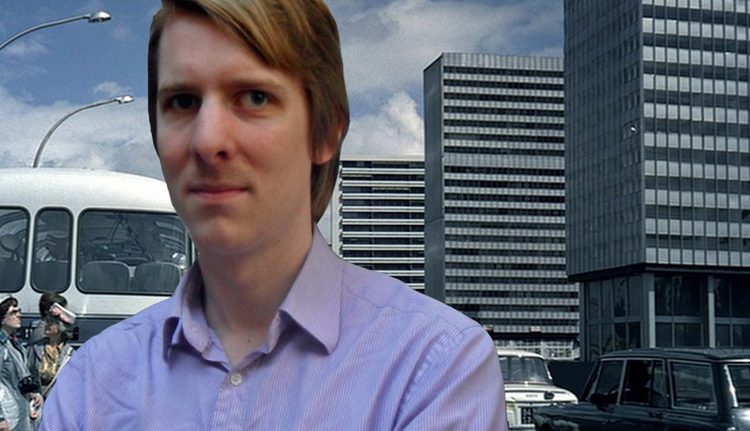 Go to Europe, they said. You’ll like it there, they said. OWEN HATHERLEY used his appearance at Hyde Park Book Club to talk about his myth-busting tour of Europe and why we can’t have nice things… Review: NEIL MUDD

Where does Europe begin and where does it end? According to the Eurovision Song Contest at least as far away as Bondi Beach, it seems. Everybody needs good neighbours.

Author and architectural critic Owen Hatherley is in town to give a bit of a tragic lantern show about his new book Trans Europe Express: Tours of a Lost Continent (Penguin) published earlier this year. (There is another one out soon, though largely made up of ‘offcuts from this one,’ he tells the audience.)

Tonight’s event has been organised by State of the Arts as part of its Ideasmiths series of talks on politics, cities and culture. Created and hosted by historian and urbanist David Ellis with Hyde Park Book Club’s Jack Simpson, they have been flying the flag for modernism in Leeds for some time now.

Appropriately enough, Hatherley’s talk takes place below stairs in a space which Ellis informs us has been called a ‘Brutalist bunker,’ though its ad hoc unpainted wall partitioning and tangled vinery of extension leads is more suggestive of a Situationist squat.

Still wearing his raincoat, Hatherley slightly sags in a chair on the raised dais platform at the front and waves a black Moleskine notebook around for emphasis like some fey Jacques Tati impersonator.

He is engaging and sardonic, as befits an architectural critic. He is a far more foppish presence in real life than his robust online posturing might suggest. Hatherley once Tweeted about Leeds: ‘it is always a marvel that a city with some splendid architecture and people is always so utterly fucking horrible to be in.’

Tonight it’s the turn of our European chums across the channel to get a shoeing, though Hatherley keeps a firm weather eye on the UK’s hits (Preston) and misses (his native Southampton). He describes his new book as “praise mixed with scorn, though mostly it’s just full of scorn.”

Having castigated Britain’s cities, Hatherley’s editor sent him to Europe ‘in search of things (he) liked,’ the author spent two years on a series of city breaks attempting to define why Europe’s cities seem to have everything we lack.

Just how have European planners succeeded in making public space and urban integration work, while here in Britain we have failed so miserably at it? This being Owen Hatherley, the truth is not nearly so simple or as clear cut.

At times it is pretty unpalatable as well.

Europeanisation is the new colonialism, he argues, a doctrine which has seen former Eastern Bloc countries falling over each other to remake themselves in the image of the West.

One does not get to join the E.U. club, Hatherley says, if you are perceived as being either too Muslim or too Communist or, in the case of Albania, both. One ironic consequence has been the rise of the far right in countries like Poland as they strive to be ‘just like us’ and fit in.

There is an insidious logic to the fibre-glass clad ‘new historical monuments’ of Macedonian capital Skopje or the ethnic transformation of Greece’s second largest city Thessaloniki from a thriving integrated multi-ethnic melting pot into one almost entirely populated by Greeks in under fifty years.

Even countries like Sweden and Denmark, routinely held up as textbook examples of socially conscious capitalism,  do not escape untarnished, mired by the inflammatory anti-immigrant rhetoric of the present day Danish Peoples’ Party or the plight of Somali refugees shipped out to Stockholm’s outlying estates.

Here it seems, Britain has had a hand in dragging Europe towards the right, even as New Labour embraced a continental oo-la-la on behalf of a middle class liberal intelligentsia, now viewed by Brexiteers and Old Labour alike with the same suspicion.

Trans Europe Express takes a sledgehammer to some of those stone  tablets on Europe. Those who voted Leave would probably say ‘We told you so,’ but if Hatherley’s argument is to be believed, the Europe we love to hate is a mirror image of our inward looking selves. The ‘old enemy’ might just be closer to home than we think.

Owen Hatherley – Trans Europe Express: Tours of a Lost Continent is out now. The author takes part in Sheffield Modernist Society’s Modernists in Conversation this weekend. Details and tickets here.