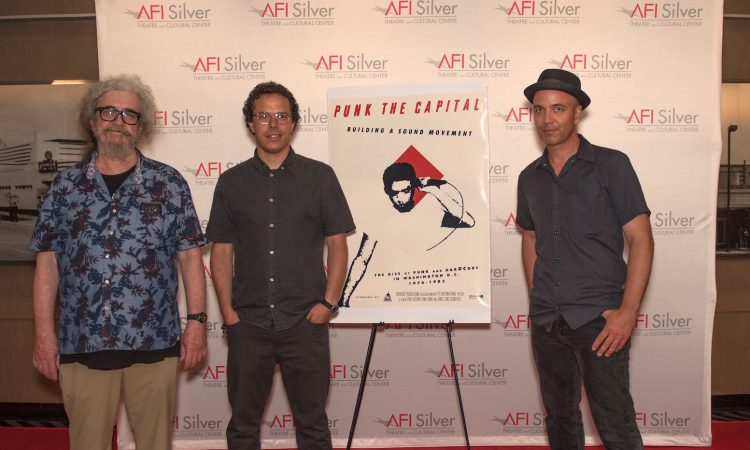 Punk the Capital directors Paul Bishow and James June Schneider (far left and far right) : ‘We cast a wide net with the idea of creating something to preserve.’

Positive Mental Attitude. No alcohol or drugs. Music so fast it made The Ramones look like they were asleep. The unique convergence of punk rock in Washington D.C. between 1976 and 1983 is the subject of Punk the Capital, a great new documentary at Leeds International Film Festival. JAMES JUNE SCHNEIDER talks to NEIL MUDD.

Washington D.C. in 1976 was a city of contradictions. Ultra-conservative in character, it had a smallish population numbering some three-quarters of a million people, over 70% of who were African-American. That the upper echelons of society and government were mostly dominated by a white middle-class intelligentsia should come as little surprise, nor that those among the city’s younger residents unenthusiastic about bluegrass or disco were left to fend for themselves. After all, 1976 was the year Boredom was declared in the UK, something echoed by local Washington resident Patricia Ragan, a writer for John Holmstrom’s Punk Magazine in the 1970s, who says: “D.C. was an empty pit of misery.”

From such unpromising humus grew something incredible, a coming together of like-minded kids in defiance of the nihilistic impulses and metropolitan elitism of de facto punk citadels London and New York. Its ritual moments of conception and birth are captured in Punk the Capital – Building a Sound Movement, a terrific new documentary which receives its UK premiere at Leeds International Film Festival next week. Charting the emergence between 1976 and 1983 of what became known as D.C. Hardcore, the film is augmented by some incredible Super-8 footage, shot first-hand by local scenester Paul Bishow, and hilariously candid interviews from the key protagonists (including Ragan).

“The actual community of people who made up the punk scene (in D.C.) was pretty small,” James June Schneider says down the phone from his El Paso motel room (he is deep into a 25-date nationwide promotional tour). “But then you had bands like Bad Brains spring up and Enzymes – who not many people know about – and nobody thought twice about that happening. It just made sense population wise [both bands prominently featured black musicians] and all kinds of other reasons. It was just a unique triangulation: the government workers, the fact it was majority African-American and that it was small; all those things gave it a very distinct soil to sprout form.”

The film-maker, who co-directed and edited Punk the Capital with Bishow, grew up in north D.C.  “I can remember an awful lot of Gilbert and Sullivan, Carmen, things like that. There were musicals as well, but I was not raised in a very musically intense family. Both my parents played piano, but I didn’t have any kind of musical foundation when punk appeared on my horizon.”

Schneider was aged around twelve when an older student introduced him to D.C. bands Minor Threat and Dag Nasty on the school bus. “Nothing else I was hearing on the radio (appealed). It’s almost a cliché – My Top 40 Hell – but it’s true. Sure, there was some good stuff, but in general it was just a wasteland. I remember spending hours on road trips scanning back and forth on the radio dial trying to find something, so when I heard D.C. punk it rang true and made perfect sense.”

“The fact it was local and seemed approachable, I could wrap my head around it. The first record I ever bought – not just the first punk record, but the first record – was by Minor Threat. In high school I started meeting other people interested in the same music and skateboarding, and we definitely bonded because of that.”

There is a fascinating archive interview clip of D.C. band Teen Idles in Punk the Capital. Asked what their parents do, they reel off a list of white-collar jobs. “These kids came from all kinds of backgrounds,” Schneider says. “These weren’t wealthy kids, at least not during the time-frame we’re covering, but they were comfortable with very supportive parents. They weren’t rebelling against the usual expected things. They were building music based on what they were experiencing in their communities, and I think that’s what made it distinctive.”

“Each city had its own flavour. Because of the isolation of communication at the time, things developed independently and D.C. certainly did. Of course, Bad Brains had a lot to do with that as you can see in the film [Schneider is referring to the group’s appropriation of Napoleon Hill’s 1959 self-help bestseller Success Through a Positive Mental Attitude]. There are problems with the whole PMA story. However, if you abstract it from the author, it was an interesting tool for punks to use. Billing it as an affirmative, constructive kind of punk just seemed normal: (Washington) was a city where people were critically thinking, so that played into it as well.”

For British audiences, Punk the Capital plays out as a kind of Rock Family Trees (though Schneider has never heard of Pete Frame) and one of the film’s undoubted pleasures is the way it revels in the unexpected confluences of a scene you thought you knew. This is in large part thanks to Bishow’s intimate, evocative Super-8 footage. “Paul befriended people from the artist collective Madam’s Organ [a Yippie commune which was the only venue willing to host punk gigs at the time]. He had his camera with him all the time filming and documenting all the bands that played there. We had a lot of outtakes to go through.”

A call-out for archive materials yielded home movies, fanzines, posters and other assorted ephemera. “We cast a wide net with the idea of creating not just material for our film, but something to preserve. We worked pretty closely with the D.C. Punk Archive, helping get other people’s collections in there. That’s been the main thing.”

Both film-makers were keen to capture a feeling of being there, rather than to merely trip out facts and anecdotes. “We had the material to spread out different space time over the film,” says Schneider. “We had fun trying to create those kinds of constellations, all the paper archives, album covers and inserts, that kind of thing. We were meticulous about using the original materials and to get the aesthetics across. All that was intentioned.”

“We made the effort to treat the archives as equally as we treat the interviews. It gives (the film) a sort of magma effect of things bubbling up and happening – the cauldron being stirred, the bread being kneaded, that kind of thing. The period, especially Madam’s Organ, has not been very well covered before (and) there was a lot of discoveries along the way, about connections between different groups. Finding out Kim Kane [of psych-punk visionaries The Slickee Boys] has never had a drink in his life was really interesting. This sort of clear-mindedness seems to traverse the scene from the get-go.”

“I’m definitely attracted by movements, by groups of people building their community together be it for a social cause or a musical movement,” confesses Schneider, whose film about counter-cultural documentary activists Newsreel is in post-production. “These are people who are usually pushing the envelope, or indeed have some kind of outsider perspective. What I’ve always been attracted to – and this might come from my D.C. punk upbringing – is the idea that people work with their surroundings to build something. It’s an interaction with their world that is important to them. These are people who draw from their reality and who are taking a look at the world through a critical eye, but with a material presence.”

Even if you think you already know everything you ever wanted to about Washington’s hardcore punk scene, Punk the Capital will surprise you. It is deeply intelligent and satisfying, a moving and affectionate corrective to punk’s traditionally bleak self-accounting. It is rich in cumulative detail about a scene marked by the unforced prominence given women and non-white artists. Community was all it seems. As Henry Rollins notes in the film: ‘All we had were our allegiances and this music, and when you have connections like that, that stuff is forever.’