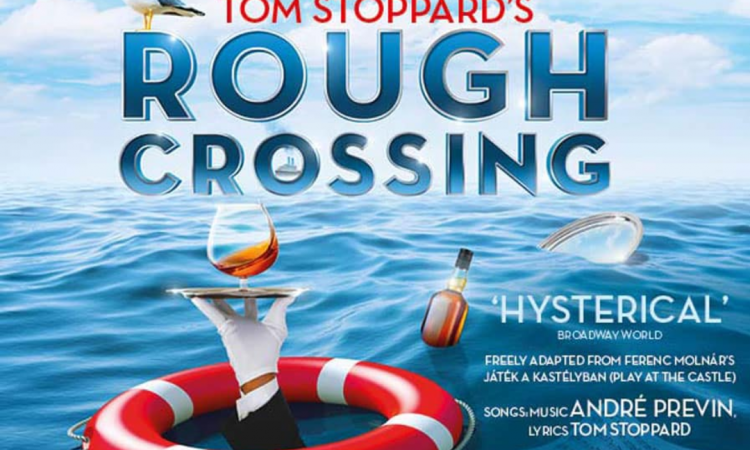 Mum always told me that if I had nothing nice to say, best say nothing at all. But then mum loved The Black and White Minstrel Show and insisted piccalilli went with everything, so I always questioned her judgement and rejected her council.

It’s not an adage that’s applicable to a theatre review anyhow. Saying something here is obligatory. You accept the press tickets in good faith, and there’s an unwritten contract that you’ll deliver 600 words within 24 hours. And everyone wants to be nice, even me (I know there are people out there who would scoff at that claim, but they are a dismal, stoney-faced lot and can sod off.)

The problem with reviewing Tom Stoppard’s Rough Crossing at Leeds Grand Theatre is the insurmountable conflict between the necessity of saying something and the inevitability that it won’t be nice. But something has to be said. Here goes.

It was rough. It made me cross.

That there were people in the audience who laughed is not in dispute – too few admittedly, a scattering of chucklers – and obviously if we all had the same tastes the world would be a duller place (that’s another of mum’s bits of wisdom, and I think she’s onto something with this one.) All I can say is that I had a laughterless evening. Nary a titter. Barely even a smirk. It was like being sucked into a black hole of humourlessness. A bottomless, howling void of tedium. It was the closest I’ve ever come to understanding what those medieval monks were on about when they defined the deadly sin of acedia, a sin which bedevilled monastic orders based on pointless repetition of meaningless chores where the rewards are minimal and slow to appear, “that leads to not even caring that one does not care.”

I just didn’t care. I couldn’t have cared less. I was beyond caring.

About ten minutes into the play – and the third repetition of the dipsomaniac Dvornichek gag, which was already twice too many for my liking – I was rocking in my seat, grimacing, grinding my teeth so badly I may have filed a molar right down to the nerve. In my head I hissed and booed and yelled, “get off. GET OFF!” Mum would at least have been proud that I’d managed to keep that to myself in what she called my “inside voice.”

And then things nose-dived.

Directly behind me a woman attempted to slowly and quietly open an industrial sized bag of pickled onion Monster Munch.

You can’t in fact open a bag of crisps slowly and quietly – let’s set aside any quibbles about the food category that Monster Munch belong to for now, and concentrate on the packaging, shall we? Monster Munch comes in a crisp packet. You have to seize the day, grab the snack with both hands, and let rip. Carpe diem! Trying to open a packet of crisps slowly and quietly is as perverse and painful as trying to remove a sticking plaster by plucking out one hair at a time. In fact, here’s a tip for future theatre Monster Munchers… open the bloody packet before the curtain goes up. Spare us the interminable faffing, please.

I’m sorry to go on about the Monster Munch incident so much but it did taint the whole evening (literally, the place reeked of pickled onion!) And I found that I couldn’t really follow what was happening on stage owing to the more dramatic collective mastication occurring on the seats behind me as the packet was passed up and down the row and relished with much commotion. Which just about sums up the evening. The play was to the stage what Monster Munch is to haute cuisine. And it’s the first time in my experience the theatre has been upstaged by a maize based, flavour enhanced, salty stinker of a snack.

The second half passed by uneventfully enough. I fortified myself for the ordeal by ordering a pint of Merlot in the interval and downing it fast – no hyperbole, an actual pint. It steadied the nerves enough to return to my seat.

I wish I had something positive to end on. As one of my fellow reviewers said, “it got us out of the house for the evening.”

In the end, that’s what counts.

If you need getting out of the house this week I could think of worse things. It’s on til Saturday 6th April 2019.

Just go easy on the Monster Munch. You do know it’s an hallucinogen in large quantities, don’t you?