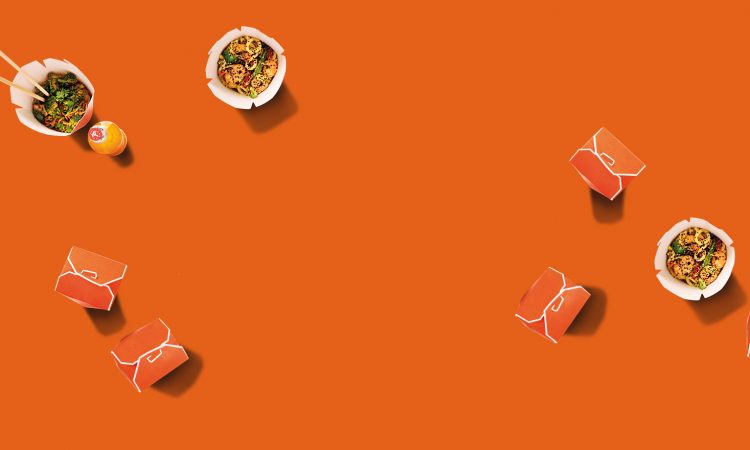 As easy as it sounds… Wok to Walk

Lunch is one of the best times of the day.

I’ve done a fair bit of research on what’s possible around noon, especially in relation to the working day, but I’d never been to Wok to Walk, which specialises in wok stir-fried Asian cuisine .

I’ve eaten some exotic things, been to some unusual places, and met some characters; some of them (fortune-teller, busker, poet, Jehovah’s Witnesses) were on the street outside Wok to Walk.

I wouldn’t usually choose a place like this to eat. I’m a snob and I don’t particularly like chains. There are thirteen of them in the UK, and around 100 worldwide.

But this is food in exchange for words: two of my favourite things.

In his book The Theory and Practice of Lunch, Keith Waterhouse says that lunch should be taken with a friend, so I invited my pal along.

His train was delayed because of some major disturbance at the station which meant we didn’t have as much time as planned. But time – or rather the lack of it – is on your side in the Wok to Walk world, as Don the assistant manager explained. You select your food and then it takes about two minutes to cook.

I’d seen someone earlier in the week, carrying a Wok to Walk carton and chopsticks through town. Knowing I was going to be visiting and reviewing it, I asked him what he thought. “Quick and classy” he replied.

While the chefs (referred to as ‘wokkists’) wok away over two fierce gas burners in the window, you choose your ingredients. It’s one of those experiences where you’re involved in the construction of the product you’re buying, like Subway or Build a Bear.

First there’s your base of rice, noodles or vegetables, followed by meat, veg, nuts or tofu, then sauce, and finally onions, herbs and seeds to top it off. It’s as simple as it sounds.

I’m moving towards a more plant based diet, so went for vegetables instead of noodles as a base, covering them in meat, spinach, teriyaki sauce and fried onions. On the tables were more sauces including Sambal Oelek, which added a vinegary chilli hit, so my friend and I washed down our food with a tangy, homemade lemonade.

I wanted it to be crunchy, the crunch of flash-fried freshness. Not the meat, obviously, but the vegetables. And it was. And there was a lot of it. Don put the leftovers in a doggy bag and I had the rest for my tea.

It fed me twice. It’s fast and tasty. What more could you want in a fast food joint?

Wok to Walk is at Bond Street in Leeds.

More lunchtime food and drink options: Esther and James of OWT in Leeds