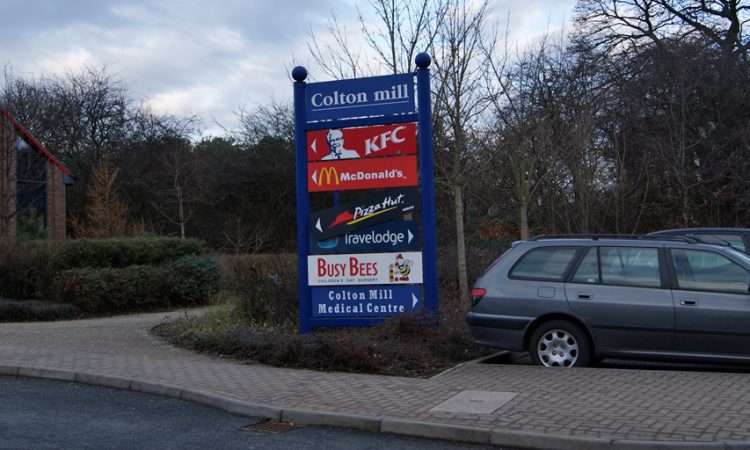 The professional rationale of ‘town planning’ is based around the notion that through their legislative powers and, as a result of their specialist training, planners are able to ‘placemake’ the built environment and somehow square the circle between the dynamics of private development and some overarching idea of the common good.

Equally urban designers conjure the belief that visual amenity, effective co-location and community engagement can achieve a better life for all.

However lofty and well-intentioned these ideas might appear, the outcomes are often more prosaic, accidentally revealing spatially the paradoxes and contradictions in contemporary culture.

Here are some local examples:

Obviously the Colton Mill Hospitality Hub, consisting of a Harvester, KFC, McDonalds and Pizza Hut was created long before the Director of Public Health for Leeds published his 2014 annual report Planning a Healthy City.

Fortunately, after tucking into your Harvester breakfast (above) you can pop along to the on-site Colton Medical Centre if you find yourself suffering from chest pains.

It’s great Leeds has outlets where you can buy a very expensive ultra-high performance super car to show off to your neighbours as you make lots of noise revving it up and pushing out masses of pollution, before driving off at speeds of up to nearly 200 mph where the law [the national speed limit is 70 mph, or 60 mph on a single carriageway, John – Not Fast or Furious Ed] and road conditions allow.

But if you would be so good, leave your car next door at the Park and Ride the next time you plan a trip to the city centre

** See also the Porsche Centre Leeds (just around the corner from the Elland Road Park and Ride).

Writing in his 1980’s book Legislators and Interpreters, Leeds professor of Sociology Zygmunt Bauman argued that the emerging major social division at that time was between ‘the seduced’ and ‘the repressed.’

By ‘seduced’ he was referring to the success of consumer capital in creating a culture in which shopping had become a leisure activity, where people ’embraced’ spectacular, but ultimately meaningless events and pursued ‘in the moment’ fads and fashions as they briefly came and went.

Excluded from this mass deception was ‘the repressed.’ These were people caught up in what remained of an increasingly draconian welfare state, their lives were policed to ensure they were ‘actively seeking work’ with the ultimate threat for non-compliance being a reduction in the already meagre benefits they were currently receiving.

Evocatively enough, the Eastgate Roundabout reflects Bauman’s analysis perfectly as Lthis high- end shopping centre confronts almost adjacently the Job Centre Plus – a clear warning to any over-ambitious consumer of what lies in store [Ha! I see what you did there… Ed] should they fall off the financial ladder.

What do we learn then from this paradoxical placemaking?

Corporate interests will always trump the interest of policymakers, the desires of conspicuous high-end consumers will undermine efforts towards sustainability and, however planners and urbanists try to dress up the urban environment, underlying inequalities will always be revealed if keep your eyes open.

John Sour is a pointer out of things and self-confessed burden on society. He also has a tendency to lapse into the third person when talking about himself… Find him on Twitter here.