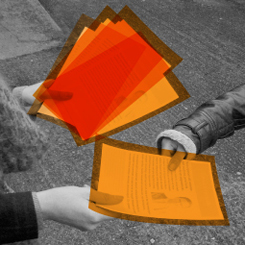 Writing previously on Culture Vulture about what Leeds City Council could do to help facilitate and promote the city’s independent cultural sector, I suggested the removal of restrictions on the use of public space, including ‘expensive licensing procedures for leafleting in and around the city centre’. Public space should be just that: space we can use without charge or official sanction; but, as a new report by civil liberties campaigning group The Manifesto Club shows, Leeds is not alone in placing restrictions on leafleting in and around city centres. This is, in fact, an anti-social activity indulged in by many local authorities.

Leafleting: A Liberty Lost? charts the steady growth of local authority controls over public leafleting and fly-posting in recent years, in particular since the introduction of the Clean Neighbourhoods and Environment Act 2005 (CNEA). This act allows local authorities to designate areas within which people must have a license and/or authorised badges to distribute free printed material; the cost of which can run into hundreds of pounds.

In West Yorkshire, for example, Kirklees Council charges £100 and Wakefield £150 per distributer per year; while Leeds City Council has an ascending scale from £75 for a single badge to £175 for four or more badges per year. In addition, leafleting restrictions are often enforced by fixed penalties that are largely unregulated, with council officials acting as judge and jury. Licensing also gives local authorities unprecedented control over the content of literature, including the specification not to be ‘offensive’; which, in today’s you-can’t say-that culture, could really mean anything.

Most importantly, however, is that such regulations and restrictions amount to an attack on centuries old civic freedoms and traditions. As the Manifesto Club report says: leaflets, handbills and posters have been a part of British urban and democratic culture since 1695 when ‘the pressure of liberal opinion won the day, and the licensing of printing was finally ended’. While local by-laws soon developed that prohibited ‘unreasonable leafleting’, this was only to prevent wilful obstruction or harassment of passers-by, not to restrict our freedom to pass pieces of paper between one another. This remained the case until 2002, when the government report Living Places – Cleaner, Safer, Greener set the scene for subsequent regulations on leafleting.

Living Places responded to real problems of urban decline by focusing on removing various kinds of ‘mess’ from the urban environment, ‘with an obsessive focus on litter – whether dog mess, graffiti, chewing gum or leaflets’. This was inspired by the ‘broken windows’ theory of urban decay that was influential in the UK and US in the 1990s, according to which signs of disorder encourage further anti-social behaviour. For the Manifesto Club, ‘the problem with such thinking is that it greatly exaggerates the importance of something like litter in influencing an area’s fortunes’. In fact, rather than signs of decay, ‘leaflets and posters can be signs of community spirit and things going on’; but, as their report argues, the regulation of leafleting actually has little to do with litter.

Instead, the crackdown on leafleting and posters is driven more by ‘an official disapproval of everyday social life’ and a ‘general desire to regulate’ spontaneous and unauthorised activities. This tendency is evidenced by local authorities’ inventing of their own ‘pseudo-legal’ regulations, and even ignoring exemptions in the CNEA to allow leafleting for ‘political purposes’, ‘a religion or belief’, or ‘by or on behalf of a charity’. So protestors opposing planned changes to Leeds’ Corn Exchange, for example, were fined for handing out leaflets without a license, as the police chose to interpret political leafleting as applying to registered political parties only. While Hull City Council operates a blanket ‘no leafleting’ policy.

But even where leafleting is permitted, the licensing process can be arduous, involving the completion of lengthy forms. In fact, ‘the simple passing of paper between two citizens, where no money changes hands – has become subject to more stringent controls than are applied to many street sellers’. As such, licensing schemes effectively reduce city centre promotion to those companies that can afford it; thereby disproportionately affecting those smaller commercial or cultural initiatives which arguably need it the most, and eliminating an element of spontaneity from what should be an easy way to pass along information. The biggest loss though ‘is the notion that leafleting is a public freedom … rather than an activity which is carried out only with the sanction and under the control of public authority’. As Leafleting: A Liberty Lost? says, under the likes of the CNEA, councils are behaving like private landlords, setting conditions for the use of public spaces as they see fit; and in doing so, shift the law from ‘punishing people who are behaving in an unreasonable or obstructive manner, to regulating everybody’.

Leafleting restrictions prevent the free use of public space for the exchange of ideas and information. They are expensive, bureaucratic, and suppress an important and longstanding aspect of civic life. So far, there have been only a few isolated examples of resistance; and a broader ‘alliance against leafleting controls’, as the Manifesto Club suggests, would be required to reclaim public space from over-officious local authorities. However, it would be far better for everyone if councils simply abolished these restrictions altogether.

Leafleting: A Liberty Lost? A Manifesto Club Report (2011) is available to buy or download here.

Paul Thomas is co-founder of The Leeds Salon and argues Leeds is a ‘City of Debate’.