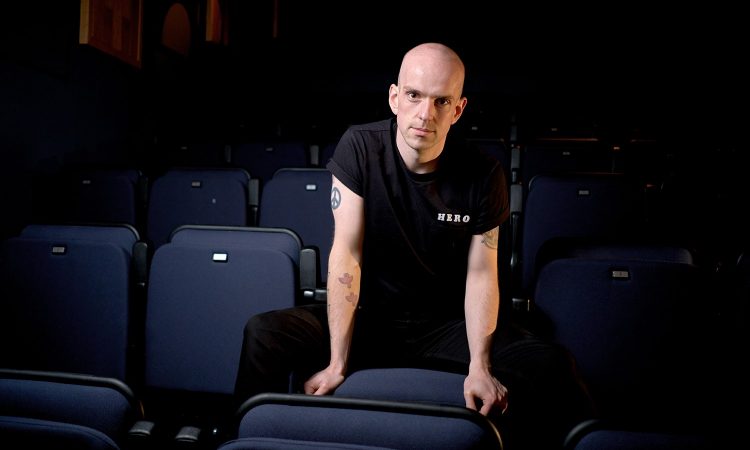 As ANDREW McMILLAN adapts Oscar Wilde’s The Picture of Dorian Gray for the stage, he talks to NEIL MUDD about gym culture, body image and the divided self…

Oscar Wilde’s fascination with physical perfection is well-known. ‘Those who find beautiful meanings in beautiful things are the cultivated,’ he wrote in The Picture of Dorian Gray. ‘For these there is hope. They are the elect…’

Strange then that his only novel should become forever linked with the ravening cost to the soul of pursuing youth and beauty to the exclusion of all else.

“He wants to paint quite a beautiful picture, to be an artist with words, and sometimes the plot is secondary to that,” suggests poet Andrew McMillan who has adapted Wilde’s cautionary tale for the stage.

“But it’s an interesting one because everyone knows the story, even if they haven’t actually read it.”

McMillan finds himself curiously attuned to Wilde’s florid prose. A poet with his own robustly confessional style, McMillan has chosen to relocate the novel’s action to a modern day gym.

“Originally we were juggling three myths,” McMillan says. “(Proper Job) knew they wanted to do something with Dorian, but they also had the idea of using the myth of Narcissus and Echo, as well as something built around changeling mythology.”

Wilde’s novel spoke to him most however: “The idea of the gym and masculinity came very quickly. That seemed a very logical place in which to set it: to be able to talk about progress pictures and how the body might be changing, but we not be able to see it.”

Earlier I had suggested to McMillan that reading Wilde can be a rather melancholy experience. “Partly it’s the way he writes (using) elongated sentences and thoughts,” agrees McMillan.

“What we want to reach for in this age of Instagram and Twitter is something plainer. Wilde diverts us, resists that kind of direct path, but consider one of his paragraphs and it can tell you a lot about contemporary society.”

Perhaps McMillan is attempting to reclaim Wilde for modern audiences? “There is something interesting about the self as seen by other people, and the self as one really feels it to be,” he says.

This sketch of unravelling duality feels acutely relevant today, feeding into social media’s rabid preoccupations with transitional body politics. For his part McMillan has talked about a ‘community of the body,’ invoking the poetry of Thom Gunn who he admires for his honesty and fearlessness: “I’m very interested in people whom we would otherwise stereotype. The play – as well as the poetry – is really just about paying close attention.”

Guarding against a mocking tone still feels like a difficult trick to pull off. “There are humorous moments, but they occur between the characters rather than poking fun at them,” he says. “The majority of the history of poetry has been about the male gaze on women. If you turn that male gaze onto other men, you see a real fragility. The trick is always to write into that fragility or tenderness and see what happens.”

“The other thing I am fascinated by is how homoerotic it is, but for heterosexual men. In the world of bodybuilding and the gym, straight men aren’t entirely doing it to attract women. What they really want is validation from other men, and it seems to me that can exist only within that sphere.”

McMillan came out as a homosexual man in Barnsley after leaving school in the 90s. Surprisingly he seems to have had a fairly straightforward time of it.

“Small towns siphon you into a very particular view of sexuality to make it non-threatening and hyperbolize it,” he cautions. “I was in the Drama Club: I would have had a much harder time coming out if I’d been in the gym or if I’d have been on the rugby team.”

“I was able to come out with a group of people my own age, all of us very innocent and able to feel it though together. Perhaps that’s been lost. It’s easier to meet people and build a community online, but we’re in danger of letting that replace our responsibility to educate young people properly.

“The first time I heard the word ‘gay’ was when someone called me it in school. Our children aren’t armed with the proper language to talk about who they are or what they might want to become.”

McMillan has found writing for the stage a difficult experience, but an enjoyable one. “The biggest challenge for me, as simple as it sounds, has been crafting something this long. A poem is quite an easy thing to hold in your head while you’re writing it, but with a play you have to think in terms of scenes and character development.”

The collaborative nature of the enterprise has come as a pleasant surprise. Initially the poet stepped away to give the actors room to inhabit and develop their characters.

“There was a really interesting moment when Dorian starts to think about taking steroids,” he says. “I’d written him as being quite naïve, but they flipped it around and made (him) sarcastic and knowing. It was a complete 180 of what I had in my head, but it was so much stronger.”

Is there a parallel to writing poetry?

“I think so, and especially once it’s out in the world. People always have different interpretations. In my first book [Physical, which won The Guardian First Book Award in 2015] there’s a very short poem called IM which I took to mean In Memoria, about someone’s death. I was in a school and they said, ‘Of course this means Instant Message and that’s why it’s really short.’ And I thought, ‘Well, why not?’ Poems do have lives outside.”

“When I first wrote a draft of the play, I was writing in all the stage directions in minute detail, but the actors told me that was their job. I only had to create the language for the characters, which was a bit of a relief to be honest, the sense that I was only responsible for part of the world and not all of it.”

McMillan is drawn towards ideas of violence and class in his writing. Through Dorian he has been able to explore the personal struggles of the body, as well as tackling ideas about gym culture and what it is doing to a generation of young men.

“There are class implications in that,” he says, “and as with a poem it is showing one thing in order to talk about a much bigger thing. There’s certainly an idea of who it is we want to be and why, and what identities we wear for different people.”

“All the characters have five or six faces. They’re one person through their social media channels, another person to their family, another in public, and so on. They’re wrestling with the one true self that doesn’t really exist and the madness which lays in their inability to piece together those fragments.”

“I mean we’ll see how people enjoy it, but it’s the spectacle of it, the ability to add live Photoshopping and the accumulation of images onscreen during the play. I could never write that, so there’s something about the visual medium. I go to festivals and read, but I’m not a performance poet. To have that extra tool – the ability to add a visual element or music which might change the mood of it – I’m really excited by.”

There is a move towards a more interdisciplinary approach to poetry, typified by artists and writers such as Heather Phillipson and Jay Bernard. “It’s an interesting time in terms of those traditional boundaries being broken down,” he says. “I saw The Barbershop Chronicles in Sheffield. Inua Ellams has written this incredible play about masculinity set in a Nigerian barbershop with such beautiful language it could be poetry.”

The idea of finding beauty unexpected places elicits Wilde who perversely sought to objectify beauty in a novel about the usurious cost and futility of making an object of beauty.

“Wilde just did what a lot of writers try to do, but often fail at,” says McMillan, “which is to take a high concept and deliver it in a sentence we understand. The ‘Portrait in the Attic’ is so much easier to consider than the duality of our own existence.”

Andrew McMillan. He has nothing to declare, but Oscar Wilde’s genius.