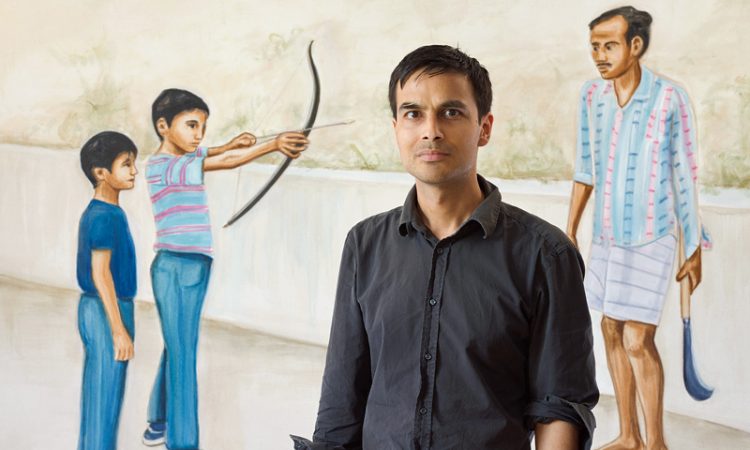 THE SUN NEVER SETS is artist MATTHEW KRISHANU’s hotly-tipped first solo exhibition at HUDDERSFIELD ART GALLERY. He talks to NEIL MUDD about what it’s like to grow up between two cultures, how all art is political and why you’ve got to have faith…

‘We are all there on the roof, crowded together to get into the picture frame … Most of us are laughing or smiling as we squint into the glare … The colours are striking: there are the reds, blues and whites of T-shirts, shorts, dresses; a half-peeled orange; a halo-yellow cycling cap; the wide stripes of a deckchair. And over all of this is the deep blue of the empty sky – the colour of memory.’

A member of the ‘invite only’ group of artists known as Contemporary British Painting, four of Krishanu’s works figure in the Arts Council Permanent Collection, and another can be seen as part of the John Moores Painting Prize exhibition in Liverpool: his star is indeed in its ascendancy.

Born in Bradford, the younger son of an English Christian Minister and an Indian theologian mother, Krishanu spent part of his early childhood in Bangladesh. He recalls feeling during visits to his mother’s family in India as if he were caught between two disparate worlds.

He told Robert Priseman for Art UK, the experience left him with a sense of being ‘somewhat outside of each of the cultures,’ a duality which can be detected in the exhibition’s portraits of solitary, incongruous sari-clad European women, with their sense of an ending.

“I spent a lot of time coming up with the show’s title,” Krishanu says. “I probably had thirty-odd possible titles, but The Sun Never Sets was the one I kept coming back to.”

Struck by its air of romanticism, his choice of title importunes a time when an Englishman could say without fear of contradiction, ‘The sun never sets on the British Empire.’ Krishanu says the phrase resonated with him in other more personal ways.

“I’m thinking of the bright lights in my childhood, the way the sun would reflect in this very glassy way. It also relates to the way, in memories of childhood, the days last so long (and) summer holidays feel endless.”

That sense of breathless expanse and wonder is evident in the liberating use of the gallery’s handsome exhibition spaces. With smaller works assigned to the main room’s vestibule entrance, two huge dividers have been able to be removed.

“At first I thought we’d need them,” Krishanu says, “but it didn’t make sense to have the view of the larger works interrupted. I really wanted it to feel like an immersive space. It was a very much a conscious decision, and it was absolutely the right decision.”

As though striving to make sense of his own preadolescent experiences, there is a sharp-edged poignancy in the series of paintings of the artist with his older brother (the actor Richard Sumitro) as boys.

These instinctive quasi-autobiographical pieces – in which memory, mythology and art history appear to coalesce – fix a moment in time: the collective recall of a childhood on which the sun never sets.

“There’s perhaps more of an awkwardness to my body language – the quieter, younger sibling – but (Richard’s) the taller one and often dominates in the paintings. In a sense it’s an element of that sibling relationship or rivalry that I’m exploring, but the nicest thing for me is I think of them as two boys who look back at us as if through a mirror.

“The whole show is about memory melding with art history and that creative spark which happens in the studio,” he says.

In his painting Golly, for example, Krishanu paints his brother sat on a chair with a discarded doll at his feet. It is at once sentimental and unsettling. Krishanu explains how he worked up the piece from a family photograph taken in a Scottish back-garden before he was born.

Invoking Edward Hopper’s Rooms by the Sea, the artist substituted an ocean for the garden, adding the deep translucent blue of a ship – “a ship that looked like it could be any time in the past two hundred years” – because he wanted the viewer free to “make connections when they see the boy, the ship, the doll.”

Is the other worldliness which marks out the two brothers intended to suggest a more profound disengagement beneath the surface of the works in the exhibition, I ask?

“It will vary and that’s the challenge of this show,” Krishanu says. “For example, in the painting Limbs there’s a look of triumph on both the boys’ faces as they look down on the viewer [from a tree]. They look completely rooted in their environment.”

This is in contrast to the Mission series of paintings elsewhere in the exhibition. Here the viewer is positioned behind, or as part of, a congregation, looking on as the priest metes out his benediction. Like some uncomfortable colonial afterimage, these rituals of Christian worship are presented as ‘other.’

“That’s why the Two Boys’ paintings are so important,” Krishanu says driving at the essence of his art. “I found when I drew those two boys they have a strength together, in that they are seen as one, and not as lonely or alone.”

“For me, these are the things I’m drawn to in a painting, the sense of an interior life of a figure using minimal means. I find if I add too much then the viewer can’t project as much of a life onto it, and that it becomes too prescriptive or too photographic or too representational. I think of the painted figures as vessels, vessels upon which to project individuality. Everyone’s lived experience is within their heads.”

If this all sounds like his own peculiar brand of existential mindfulness, Krishanu refuses to acknowledge any overtly spiritual impulse.

“I am not a religious person,” he says. “My parents were always engaged in work for the church, but from a young age I actually found it created far more problems in my mind about what the world was, than gave any answers.”

One difficulty is with the visual arts themselves – or rather as they have evolved through the European tradition. Krishanu’s university encounters with Art History and Post-Colonial Literature merely served to highlight the gulf which existed between the manipulated ‘truths’ of European religious painting and the Bangladeshi culture in which he spent his early years.

“I don’t have hard and fast answers,” he says of his own work. “I do think of (my paintings) as very much constructed. It’s not so much autobiography; it’s more about (how) this childhood got me thinking about all these things that relate to every day when we turn on the news.”

“All of this relates – in my mind at least – to questions of art history and people seeing (it) as in some way innocent. People think of black artists as ‘political’; to suggest all the paintings over hundreds of years are somehow neutral, but Lubaina Himid or Sonia Boyce (are) political, I find this extraordinarily blinkered.”

Krishanu must feel free to interrogate the images he is creating, he says: “They can’t be closed books because I find that disengaging. I want to see things that linger in the mind.”

He will often return to a subject if he feels there are still things to be said. For example, the two versions of Mission School (one of which is in the current exhibition) “shows how the same source material can create two very different paintings.”

Unusually for an artist, Krishanu does not pre-draw or use a projector when he is working. “It’s all with thin layers of paint built up over multiple sessions. I just like to draw with the paint. It will be completely different when it’s a different scale, the way it actually fills the space and the relationship with the people to the rectangle.”

Earlier we had been talking about listening to music in the studio. Krishanu says he insisted for a time on absolute silence, even going so far as to write up a checklist for each painting session and refusing himself breaks or access to his mobile phone. It was a “quite intensive, self-imposed working process,” he says.

In what has proved to be “a productive period,” for the past year Krishanu has been listening to music again: he mentions Björk collaborator Arca, the Tunisian songstress Emel Mathlouthi, lo-fi hardy perennial Bill Callahan (Smog) and P J Harvey: “It had to be very low key,” he says. “In the studio it had to be mellow, stuff with that slight drone quality…”

With serious collectors beginning to sit up and pay attention, Krishanu’s exhibition at Huddersfield Art Gallery has been a real coup. The challenge as an artist, he says, has  been to maintain staying power: “You’ve got to work – usually anyway – for decades, building up a body of work that is particular to you and where you develop your themes. You have to have the faith that what you are doing is important, and you’ve got to keep going with it.”

The exhibition at Huddersfield closes on Saturday when Krishanu will be discussing his life and work in conversation with arts curator Amanprit Sandhu. There is talk of The Sun Never Sets transferring to a gallery in his mother’s adopted home city of Birmingham.

The sun may have finally set on the British Empire, but it still continues to shine…