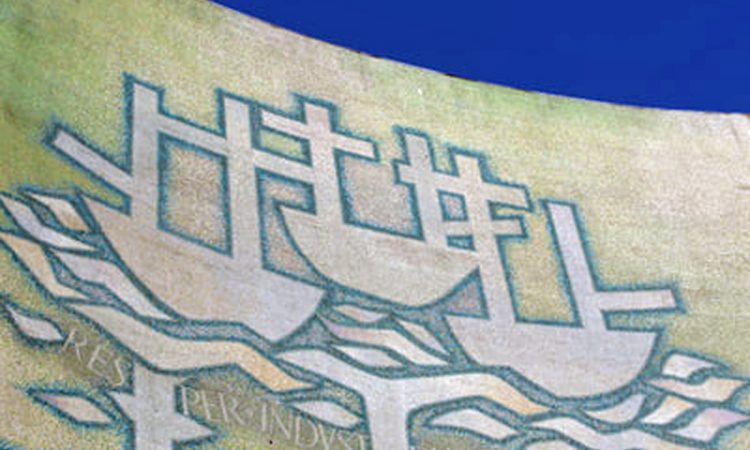 Hull’s landmark Three Ships mural is under threat. ESTHER JOHNSON and LEIGH BIRD talk to NEIL MUDD about Ships in the Sky, their social history project which has one eye on saving the late artist Alan Boyson’s unique artwork for future generations…

The 1951 Festival of Britain should have been a Beacon for Change, a modernist torch to light the way.

Instead, thanks to a Conservative government who couldn’t wait to turn back the clocks quickly enough, it ended with Skylon, the festival’s iconic symbol, being sold off cheap to an enterprising firm of scrap metal merchants who turned it into souvenir ephemera.

The past may be a foreign country, but we do things exactly the same here…

Ships in the Sky is an ambitious, collaborative multimedia project between film-maker Esther Johnson and marketing consultant Leigh Bird. It aims to tell the people’s story of Hull’s Co-operative department store with its striking Italian glass mosaic Three Ships mural by the late Alan Boyson.

Council approval to tear down the building is looking likely, so the race is on to save this unique example of the Marple in Stockport ceramicist’s work from being one more debit entry in the ledger of this country’s modernist heritage.

Enter a highly articulate and visible social media campaign, organised by Leigh in conjunction with Hull Heritage Action Group, which has been instrumental in staying the planners’ hand.

“One of my first jobs was as an office junior in a firm of accountants,” Leigh tells me when I ask what Boyson’s striking three-storey mosaic means to her.

“I used to do the butty run and I’d always want to go to Fletcher’s [a well-loved local bakers and deli] so I could look at it while I was waiting in the queue.

“There was this lovely old gent called Mr Pesky, who wore a three piece suit and had a pocket watch, who used to ask, ‘Have you had your mural fix this week?’”

Esther too has fond memories of Boyson’s artwork. She remembers sitting with her father as a little girl in Fletcher’s on a Saturday, eating fried egg sandwiches and listening to stories of the sea while gazing across at the Co-op building.

“I didn’t quite know why, but I just loved going to see it.  There was a little fountain there that you could sit on and look over at the mural.”

“To me this building and this mural have always been something hopeful and optimistic and (which) looked towards the future,” she says.

“My dad went to sea when he was twelve, (starting) out on a trawler to Murmansk and up around the Arctic Circle, so to me this building represents a starting point for journeys and where you might go in life.”

“I know that sounds pretentious, but that is how I felt, and it aligns with what you were saying about the Festival of Britain and modernism, all that hope for a new future.

“It was about experimenting with new materials, with using old materials in fresh and creative ways, with form following function, and all of those great modernist ideals which coalesce in this one building.”

Built as a flagship by the newly merged Hull and East Riding Co-operative Society, the store fully opened in Hull’s King Edward Street in 1964, becoming known locally as the Skyline Department Store.

Rebranded in the eighties as a British Home Stores, the company’s implosion in 2016 left the property empty and vulnerable to property developers.

“One of the things that gives (the building) its longevity is also its potential downfall,” says Leigh.

“To my eye, it’s so timeless and clean; when you get close to it and look at the intricacy of the mosaic, it’s beautifully detailed, but lovers of Victorian architecture aren’t necessarily going to be lovers of modernism.

“There’s also the feeling that it’s not a piece of art because it’s stuck on the front of a shop. It’s been a Co-op and latterly a BHS – and there’s a little bit of taint with the way that closed.”

“It was a big presence of art in a city that was a cultural desert in many ways,” adds Esther who believes department stores and night-clubs – the building accommodated the Skyline Ballroom which offered ‘Dinner, Dance and a Cabaret,’ as well as the chance to see The Jimi Hendrix Experience, Pink Floyd and Dusty Springfield performing live – are “incredible places for memory- and place-making.”

This fascination with how people make connections with the built-environment around them underpins the Ships in the Sky project which will eventually be mounted as an exhibition and a short film.

“It’s about the politics of a time stretching from the Festival of Britain, with its spirit of optimism and hope for the future, to where we are now; the importance of public art; how people come to navigate a place; post-war regeneration… All of those things.”

“It’s a social history project,” says Leigh. “Because we know the building is going to go, it makes it even more relevant in terms of capturing how it’s affected people’s lives. Although it’s the catalyst which brought Esther and I together, the outcome of the actual campaign is less important for the project than what the murals and the building mean to people.”

The first stage of Ships in the Sky has been to reach out and interview as many people as possible about the many different ways they have been touched by the building and its murals.

These have gleaned some fascinating insights, like one woman’s memory of her parents’ refusal to take her to see Santa at the Co-op because it was a Labour shop; and the three window dressers who recall having to line up every morning before the store opened to have their hair and uniform inspected.

“I haven’t fully interviewed them yet,” says Esther, “but I just know they’re going to be great.”

She also describes as ‘fab’ the two people who got in touch – ‘totally unconnected with one another’ – who  each has the Three Ships tattooed about their person; “one of them is a writer and critic who has it because she loves the mural and believes in the Co-operative’s principles,” Esther says.

During Hull’s tenure last year as UK City of Culture, the building’s profile as a backdrop and landmark led most people to assume it was protected from the kind of invasive redevelopment which has seen much of Britain’s important modernist architecture come under the wrecking ball.

“People can get blasé about what’s in front of their noses,” says Leigh commenting on the outcry which greeted the council’s plans to demolish the building. “Hull 2017 really opened people’s eyes to the beauty of what’s on their doorstep and gave a massive boost to that sense of civic pride.”

“It’s been brilliant to see how engaged and supportive people have been about something that has almost become part of the furniture and can easily be taken for granted.”

“It becomes part of the fabric and you almost ignore it,” agrees Esther. “There is a part of me that thinks if this was in Manchester or London, it would be a lot more difficult to get rid of.”

Without the campaign (which added over five thousand signatures to the petition to save the murals), Leigh fears the worst would already have happened.

“The people of Hull have made themselves heard, but we’ve also been blown away by the support of art and architecture experts and enthusiasts far and wide.”

Despite a Tweeted commitment to saving the Three Ships, no similar mention by the Council has been made of Boyson’s other commissioned work for the Co-op however.

Depicting a shoal of fish, the mural was only rediscovered thanks to Christopher Marsden, a leading authority on Boyson, during refurbishment work in 2011.

“A lot of people haven’t seen the Fish because it was boarded over back in the mists of time,” says Leigh. “It’s a beautiful thing, but the Three Ships is at the heart of the campaign. It’s one of the biggest mosaics in the country, one of the UK’s biggest murals.”

Marsden has been very generous with his time and expertise say Esther and Leigh. His own tireless efforts to track down and preserve the few remaining examples of Boyson’s work around the country clearly chime with their own infectious evangelism for the project.

If in September the Council reneges on its commitment to campaigners – abandoning Boyson’s murals to the same fate as much of the pioneering art and design created for the Festival of Britain – it will be a tragedy for all concerned.

With hope in such desperate short supply, Ships in the Sky looks to the past in order to chart a course into the future…

Sadly, while this article was being finalised the sad news that Alan Boyson had died reached us. The Ships in the Sky project is to be dedicated to his memory. Further information about the artist and the project can be found here.

An article by Esther and Leigh about Alan Boyson and the Ships in the Sky project appears in the latest edition of The Modernist magazine. Details can be found here.