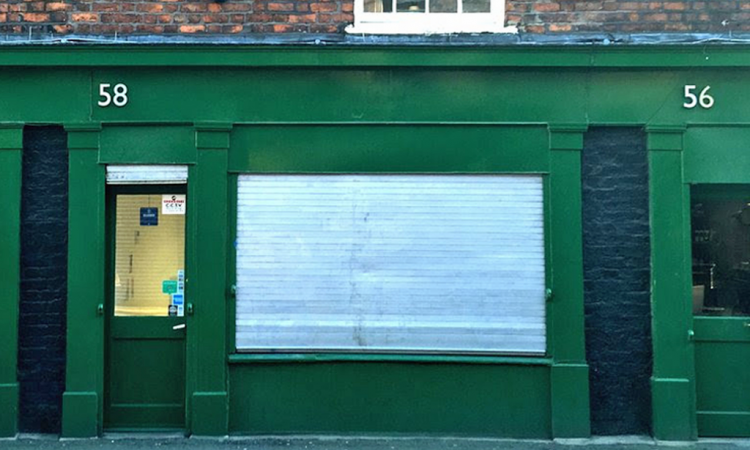 Open All Hours | The new Modernist Society shop in Port Street, one of Manchester’s oldest properties

In its tenth year, The Modernist Society is moving to newly acquired premises in Manchester’s Northern Quarter. The period Georgian three storey cottage will combine office facilities with a retail outlet plus a much-needed, fully accessible gallery and exhibition space. Potential shows are already lined up, as well as smaller scale indoor events such as launches, talks and film screenings.

Eddy Rhead and Jack Hale, who started the Manchester Modernist Society ten years ago as a not for profit organisation, are hoping the recently launched Crowdfunder campaign will help offset the initially high costs involved.

It is a characteristically eclectic offer. For a financial contribution, pledgors are given money at the Modernist Society exchange rate to spend in the online shop. More interesting are the Modernist banknotes (available in denominations of £20, £50 or £100) which have been designed by international artist Mishka Henner and which come in the form of a signed and individually numbered artist’s print.

Eddy and Jack want the new premises to be ‘a social space where people feel free to come and browse an exhibition, chat Modernism and maybe pick up a magazine or badge.’ They like a badge, do Jack and Eddy…

It’s all happened quite quickly really. We’ve been looking for years. We thought when there was the last property crash there would be loads of spaces that would come up for people to rent, but it never actually materialised. It became increasingly difficult to find a suitable space. A couple did come up but we’d get gazumped by a coffee shop or a solicitor’s or the landlord would just look at us and say, “You’re a what?” They couldn’t get their head round what it is we do. We’ve been very close before and we’ve had some positive noises from property developers, but they’ve not actually come up with the goods. In the end, we decided we can’t just fuck around anymore, we’re going to have to do it and by happy coincidence this space came up.

In many ways it’s perfect: the location’s great, it’s in a retail area and there’s a good pub opposite. We mentioned to a friend of ours we’d been to see it and he just happened to know the landlord. He made a phone call and the guy had heard of us and liked what we do, but it’s a proper financial gamble. It’s not something we’re taking lightly. We’ve come so far after ten years we can’t just keep doing what we’re doing; we’ve got to take it to the next level, so this has been part of the plan for the last four or five years.

The shop’s all fitted and nicely done. It’s a listed building, but there’s enough scope in the interior to allow us to impose ourselves. It’s not a white Modernist cube, it’s a bit higgledy-piggedly and olde worlde, but all the nice Modernist places are either bars or Wagamamas. How we want to do it is, we want to blur the lines between the shop bit and the exhibition bit. There’s also going to be all the crap we’ve collected over the years from our office. It’s not going to be a pure exhibition space or a pure retail space, it’s going to be like our front room – a space where you can come see us and stick around and buy something and go see the exhibition.

This is going to be our permanent home, instead of having to look around for venues. we’ll be able to say yes to more exhibitions because now we’ve got a space for it. They’ll have to be preformed and ready to go though. People can’t just turn up with an idea and expect us to put it on and it’ll have to be be mostly 2D stuff; the space doesn’t really lend itself to having an Anish Kapoor retrospective. It’ll have to be photography or graphic design or something like that. We’ve already heard from Andy Votel with something we’d like to do, so perfect.

We’ve got some really good rewards. Mishka Henner has designed us some money. We’ve always wanted to do money. In return for your English pounds we will give you Modernist money, but as a print. So you can play it safe and pledge real money to spend on the site, or you can buy some bespoke money which is absolutely worthless, but as we’re announcing it on Brexit day, [laughs] we fully expect it to increase in value while the pound goes down!

We’ll see how it all goes when we open on May the first. Nobody has been in touch to say, ‘What the fuck are you thinking?!’ In fact, everybody has been very positive about it – a new Modernist HQ in one of Manchester’s oldest buildings.

You can access the Manchester Modernist Crowdfunding project here.

Interview with Jack Hale and Eddy Rhead on the site.