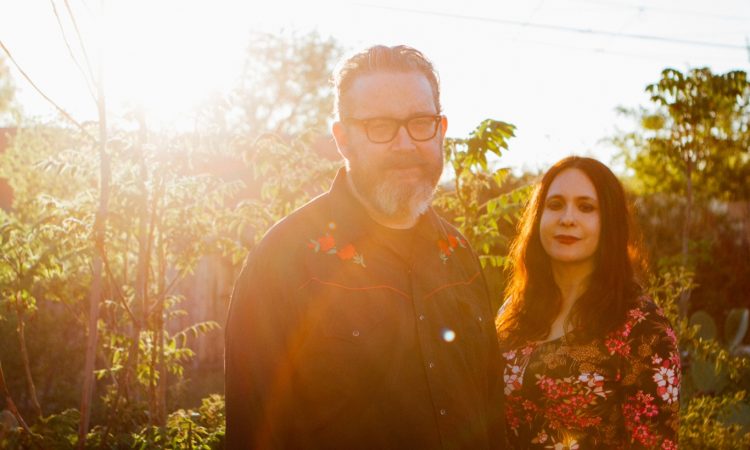 Neither Brett nor Rennie Sparks, the husband and wife core of country-noir symbolists The Handsome Family, is familiar with Leonora Carrington.

It is a shame because the English-born surrealist’s dark transgressive fictions populated by Freudian sharp-fanged creatures share the same DNA as Rennie’s own bibleblack narratives.

“Just cause we write songs that sound country-ish, doesn’t mean I’m not interested in building an inter-dimensional portal or summon a murder of crows to steal wrist watches for me,” Rennie offers by way of response.

Not for the first time, I get what I deserve for being a smart arse…

Carrington lived most of her adult life in Mexico City, a day’s drive from Alberquerque, New Mexico which The Handsome Family calls home, and it remains tempting to imagine there is something in the water.

Brett and Rennie have been steadily charting their lush obsidian course as The Handsome Family – the name a jibe that stuck fast – since 1993. Providing the theme for the first season of HBO’s True Detective may have helped raise their profile a little, but Brett is quick to dismiss their song Far From Any Road as ‘nothing special.’

“We strive for vivid imagery in all our songs,” he says.

Listening to the songs on recent album Unseen one is struck by their timelessness. There are wry nods to an American landscape of Stop-N-Gos and State Fairs, but the music holds the listener in its warm, whiskey-soaked embrace and harks back to the good days ‘where everything was better, darker and deep’.

Are Brett or Rennie mindful of a certain songwriting tradition?

“Yes, but probably not the one you are alluding to,” says Brett who dismisses most Americana as too predictable. “I am more influenced by Tin Pan Alley, Jimmy Webb and The Beatles than country.”

“Of course, we love the art of songwriting and if you love songs then you have to love the great tradition of story songs,” adds Rennie. “For poor people traveling across the world, songs were sometimes the only thing they could carry with them. Damn important!”

In 1998, The Handsome Family appeared on Uncut magazine’s compilation Sounds of the New West, a definitive snapshot of the burgeoning Americana scene which also included contributions from Lambchop, Calexico and Vic Chestnutt amongst others.

In the same year Uncut proclaimed the band’s fourth release, Through the Trees, the Best New Country Album of the Year. For many in the UK, it was their first encounter with Brett and Rennie’s particular brand of downbeat magic realism.

“I am still blown away by being included in the list,” says Rennie. “We weren’t aware that anyone would want to include us until they did.”

Like her lyrics for Brett’s widescreen vistas, Rennie’s replies to my questions are allusive and playful. Evil, her short story collection, was described by one reviewer as ‘William S Burroughs meets Carson McCullers,’ which sounds about right.

Rennie says she is a fan of stories and humankind’s desire to tell them.

“Stories, like dreams, are a safe way to talk about very scary things, ordinarily unspeakable things,” she says. “I loved Vic Chestnutt and, like a lot of people, I was turned into a songwriter by listening to his first record, Little.”

“There really are no deliberate ploys in songwriting. It’s more of a terrifying battle with unseen entities, and it mostly ends in your shreds of thought just vanishing into the garbage pail.”

“False modesty,” disagrees Brett. “Rennie is a very image rich person … and her words are as cinematic as I’ve ever heard.”

The exchange is a reminder that the couple are midway through an extensive tour schedule which takes in the UK and mainland Europe over the next few months.

“How do people stand to be away from those they love whilst on the road?” wonders Brett. Rennie has never been in a band with anyone else, so has no way to compare.

Mindful of Brett’s earlier remarks on the subject, I ask Rennie how she feels about the A-word. “We’ve been called a lot of things during our lives as musicians,” she says. “It’s nice to be talked about and remembered in any way people want.”

“I tend to describe our music as Lovecraftian Country.”

There is something in the water…

The Handsome Family appear at Howard Assembly Room in Leeds on Saturday 17th March and The Plug in Sheffield on Sunday 18th March.  On tour.

RELATED | Interview with Ruarri Joseph of William the Conqueror