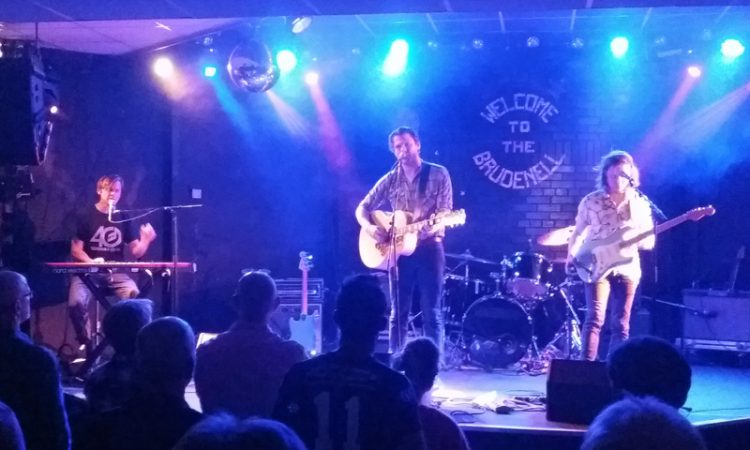 JAMES WILSON chats to NEIL MUDD about murder ballads, brotherly love and the redemptive power of heavy metal as Sons of Bill bring their lush arrangements of America’s wide-open spaces to the Brudenell…

As an encore song at the Brudenell, Sons of Bill performed Iron Maiden’s Wasted Years, transforming the hoary rocker into a bewitching lament.

Reportedly, the band’s frontman James Wilson had anger issues as a kid. He was sent to Quaker school where he was saved by rock and roll, getting into FM radio and heavy metal music.

“There was an awful lot of metal,” he remembers.

Named for their father, a respected Religious Studies Professor at the University of Virginia, Sons of Bill coalesced in 2006 around brothers Sam, Abe, and James Wilson.

“(He) loved music so intensely and personally,” says James of his father’s influence. “We learned at an early age that music wasn’t just pleasurable, it was important.”

The need to understand what makes a song tragic or beautiful or worth singing stuck deep. “I knew all the lyrics to murder ballads, while my friends were listening to Sir Mix-a-lot,” James says.

Hearing the wonderful chiming insistence of Believer / Pretender with its cascading guitars and soaring harmonies, it’s hard to credit that Thrash progenitors Metallica are another tour-bus favourite.

“Americana as a term is increasingly like Lulu Lemon Pants [a line of women’s yoga togs – Ed.],” says James of the label usually applied to Sons of Bill. “I don’t like it very much, (but) I feel we have deep roots in all sorts of traditions.  You just try to pull from (the ones) that give you goosebumps and make it your own for the present moment.”

There is a ripple of acknowledgement among the Brudenell audience when the band play the opening chords to Lost In the Cosmos, their gorgeous tribute to Big Star’s Chris Bell, the influential Memphis Anglophiles’ other great songwriter.

Big Star famously imploded in a squall of egos and criminal under-appreciation. Rock’s Highway is strewn with the debris and roadkill of bands whose members have outgrown one another.

Given there are three of them and they share the same surname, does James ever fear the Curse of the Beach Boys?

“I would LOVE the Curse of the Beach Boys whatever that may be,” he says [That would be divine genius followed by madness and decades of bitter legal entanglements – Helpful Ed].

“Honestly, I’m in a band with my brothers because I love and respect them as artists. We all trust each other to put the music first and not let egos get in the way.  As long as that’s (our) focus, it’s easy to get along and sweat the small stuff.”

When his brother Sam steps up for the folksy Road to Canaan (from 2015’s Love and Logic), James melts into the background, teasing out a haunting refrain on his older sibling’s powder blue Strat.

When Sons of Bill do rock out they recall The Boss and Jeff Tweedy’s Wilco – or sometimes even Murmur-period REM, but their impulse for melodic introspection is never too far away. And in case this all sounds rather precious, James has a winning way with a dead-pan intro.

“I wrote this song in my twenties thinking it was about suicide,” he says of The Fishing Song, “but I realised listening to it in my thirties that really it’s just about fishing. You think you write a song…”

The band is clearly pleased as punch to be here. Like Big Star, Sons of Bill acknowledge a debt to the British Invasion. “I love British rock,” agrees James. “Other than a few bands I’d say you’ve got us beat in that department.”

Represented this side of the pond by alt-country label Loose Music, does James feel the same way about Britain’s Americana music fringe?

“I think the search for “authenticity” is kind of silly when it focuses on an artist’s biography rather than their art,” he says.  “Most of that is just PR anyway. Billy Bragg is incredible and finds his way to my stereo often.”

Sons of Bill play Manchester’s Soup Kitchen tonight and the Rescue Rooms in Nottingham tomorrow before continuing onto gigs in Germany and Amsterdam. Catch them while you can…