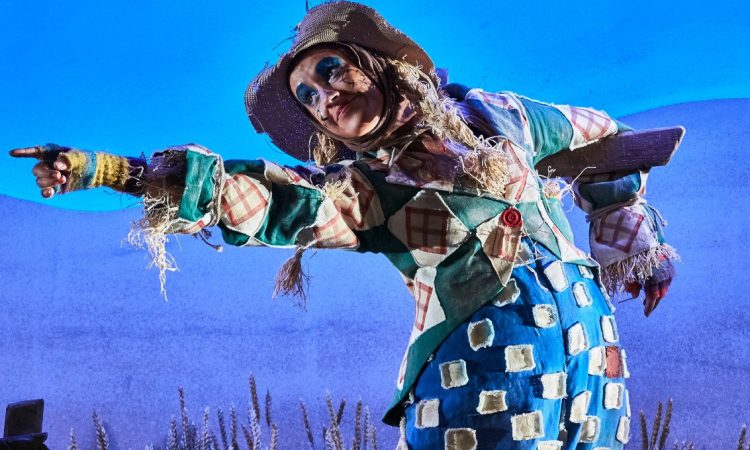 The Wizard of Oz | The Scarecrow points the way…

A girl-child hero. Three Totos. A prizefighting Cowardly Lion. Jitterbugging. James Brining’s version of The Wizard of Oz at the newly refurbished Leeds Playhouse has it all, says ROSE GEORGE.

There are countless theories about what it all means. Oz, the Yellow Brick Road, The Winkies, those ruby slippers (that were originally silver, but turned red for Technicolor). Perhaps it’s about capitalism and communism? Or is it a religious allegory?

My favourite theory is the feminist one: L. Frank Baum, who wrote The Wonderful Wizard of Oz in 1900, was the child of one suffragist and was married to another. This actually makes sense when you consider how rarely, even now, we get a girl-child hero. And even better, one who is neither rescued nor saved, but saves herself (and others).

All the powerful characters in his story are female: all the men troubled, flawed or fake. If Baum wasn’t a feminist when he thought up the story of Dorothy, then I’ll eat my witch’s hat.

But never mind all that. You want to know whether Leeds Playhouse’s The Wizard of Oz is any good. It is the big Christmas production to launch the new improved Leeds Playhouse – and both are directed by James Brining.

The most important role of course is Toto, shared here between actual dogs Scruff and Doris and a puppet who takes over (with operator Ailsa Dalling) when in Oz. I’d been reliably informed beforehand that one live dog was more comfortable on stage than the other, which had a habit of fleeing. Something must have been in the dog’s water bowl because although Doris – I mean Toto – performed beautifully in the first act, by the time she came back for the finale she’d had enough, exiting stage right with the speed of a broomstick on turbo-drive.

The humans were better at staying put. But not just staying put: dancing, jitterbugging, whirling up and down aerial silks (highly effective in signifying the twisting turbulence of Dorothy’s journeys to and from Oz). And they talked a lot too. When Dorothy first spoke, my heart sank. I’ve sat through too many plays performed in British theatres for British audiences in pointless American accents: was this another one? But the accents were decent, and they were necessary, when place – Kansas and its over-the-rainbow version Oz – is so central. Lucy Sherman, as Dorothy, had charisma and grace in abundance, and none of that ‘over-being’ that child actors sometimes have.

Choosing a child to play Dorothy is more unusual than you’d think, and Brining came to it only when he was wondering how to deal with the Munchkins. In the 1939 MGM film, they were performed by adults of restricted growth: Brining, opting instead to cast children (all performers from the Leeds City region), realised Dorothy had to be a child as well.

In his essay author Salman Rushdie argues the story is about how children are failed by adults: Dorothy’s cobbled-together family at home – Rushdie thinks Aunt Em and Uncle Henry are not blood relatives – is found wanting when they cannot save Toto from nasty Miss Gulch who wants him killed, and so Dorothy sets forth to find another. This production underlines Rushdie’s theory subtly, making her aunt and uncle a mixed race couple without passing comment, as if it is (and how we wish it were) entirely normal.

Difference matters in Oz. For Rushdie, the narrative of Oz is both radical and safe. For Brining ‘there’s a tension between the quest to find new places of a different colour, and which include different people, different creatures and the belief that ‘there’s no place like home.’ So for me the question is, how do you sustain the radicalism and progressiveness of the story and not revert to what can feel like timidity and regression?”

You do it with chutzpah and pzazz, layered onto a comforting base of familiarity. All the expected Oz-isms are here, though the gingham dress only appears when Dorothy reaches the Emerald City. The Wicked Witch of the West may not have a green face, but Paula Hirst has a fabulous presence and the best laugh. In this production, the Cowardly Lion is quite brilliantly, a prize-fighter in the Muhammad Ali vein.

When production decisions seem to have been so inevitable you accept them with a smile and an exhalation of recognition, then they are good ones. Ah yes. That makes sense. Dressing up the Witch’s evil flying monkeys like flying aces was also inspired: Kong meets Biggles.

And with nearly an hour more running time than the original film, Brining has chance to bring back the edited-out jitterbug scene, slapping numbers on the back of the exuberant dancers as if it’s a sinister Strictly – one that ends in death not an inside page in Chat magazine. Most scenes come with a video backdrop designed by Simon Wainwright which ranges from ethereal to spooky and is never not thoughtful.

Talking of sinister, O-Ee-Yah! Eoh-Ah. Or something similar. The Winkies, whose chant has never been deciphered, are often portrayed as gaily marching military types, but here they trudged in wearing ankle-length coats and fur hats like catatonic Cossacks, eliciting your sympathy far more than a gaudy soldier would have done.

The singing is what you want from a well-loved musical: powerful but accessible enough for the lyrics to be intelligible. Applause particularly to Cowardly Lion Marcus Ayton for a spectacular vocal cascade, but applause was never in short supply, for when a well-loved song is performed well, your hands come together by themselves, as if by wizardry.

This Oz is a captivating, clever production, but don’t let the intellect detract from the more important point: it’s a hoot. It delivers exactly what it is you didn’t know you required: two hours and fifty minutes of sparkle, talent, colour and joy on a dreich evening in early winter. Go and see it. Why? Because because because because.

The Wizard of Oz will be at Leeds Playhouse until 25 January 2020, with a special singalong on 13 December. Details here.